Share All sharing options for: Vitali Klitschko returns, for better or worse

Note: Those that stop by tomorrow prior to the U.S. airing of Peter-Klitschko on Showtime at 9pm EDT, please do not say anything about the fight, as BLH will be waiting for the U.S. tape delay to watch the fight so that it can be covered "live" with other U.S. viewers participating. Thank you in advance. 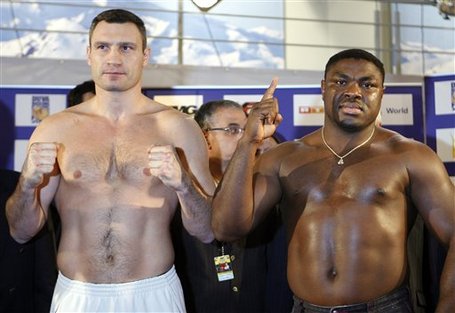 Ahhh...the heavyweights. Those most tantalizing of boxers, they of the most lore and historical noteworthiness. The big men. The prize fighters.

While sportswriters of a certain vintage likely grew up as boxing "fans," they were really fans of the spectacle that can be the heavyweight division at its best. The pomp and circumstance, the showmanship, and the clash of the titans feel that a great, important heavyweight fight can give.

Tomorrow night, Vitali Klitschko, retired four years, will return to the ring to face WBC titleholder Samuel Peter, yet another effort by the boxing world to capture some energy in its heaviest and most historically profitable division. Like many of today's biggest heavyweight title fights, the match will take place in Germany, held at the O2 Arena in Berlin.

For Peter, it's a chance to force Vitali's little brother, Wladimir, to face him again, which is the lone fight that could crown a true heavyweight champion. Wladimir beat Peter once, but it was a rough win, and one of the few memorable heavyweight scraps of recent years.

For Vitali? It's a payday. It's a return to the ring which will be treated by his biggest fans as something akin to a great warrior returning to his home city to defend the castle once more.

He's tried to come back before, of course. Just last year he was supposed to face Jameel McCline, then backed out due to yet another injury. When Peter's fight with then-WBC titleholder Oleg Maskaev fell through around the same time, it was Peter that stepped in to fight McCline, something he did not have to do. He got a bad scare from McCline, but ultimately prevailed. Later he would destroy Maskaev, the man Vitali tried to fight instead, attempting to use his "champion emeritus" status to the fullest degree.

Peter wouldn't budge, though. He was the #1 contender, and he took his shot. He cleaned house on Maskaev in March, and here we are, one day away, and Vitali Klitschko isn't hurt yet.

The fight will go on. We're talking hours at this point.

It is of less concern to me the intangibles of the matchup than the fact that it's taking place to begin with. Vitali may not have gotten it as quickly as he wished, or against the fighter he desired, but he has, for certain, returned from a long absence to cash in "champion emeritus" and walk right into a title shot. In a business -- yes, business -- you can't expect any less. Outside of perhaps Wladimir, there is no bigger money opponent for Samuel Peter than Vitali Klitschko. I'm sure Peter is perfectly happy to fight Vitali for big money than someone more "deserving" and get less.

As for the matchup, it's all a big mystery. What does Vitali have left? How strong is he? Is he really 100%, or close enough to it? How rusty will he be?

How good is Sam Peter, anyway? Even with a four-year layoff, is Klitschko still better than Peter? Prime-against-prime, I'll take Vitali every time. He's taller, stronger, and hits just as hard, if not harder. Peter's punching power has probably been overstated thanks to a lack of big-time finishers in the division. Among the riff raff, Peter scores the best knockouts at the top level.

If you ask me, this is about as likely to end on a Vitali injury as anything else, but here's hoping we get a show. If Peter comes out ready to throw bombs, Vitali may have no choice but to throw them back, which could erupt into quite a spectacle.