Share All sharing options for: Judah on for Nov. 8; Mares off for Oct. 18 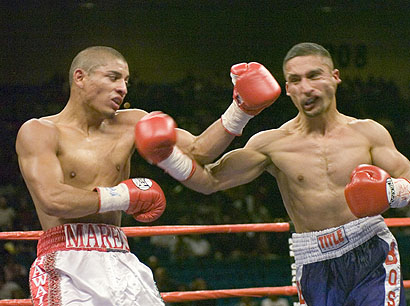 A couple of notes from Dan Rafael of ESPN on upcoming pay-per-views:

Zab Judah WILL fight on November 8 beneath Joe Calzaghe-Roy Jones, and won't be coming back at 140 like some had speculated and many hoped. He'll fight at 147 pounds again, but has officially stated he plans to go down to 140 soon:

"I'm working on my weight," Judah told ESPN.com. "I started at 140 and mentally I know that is where I should be. I'm planning to go back there and dominate. I stay ready. I'll be ready. I'm just here to show my fans I am still dominant and I can put on good fights and give great entertainment."

Judah's opponent is likely to be Ernest "Too Slick" Johnson (18-2-1, 7 KO). What a crummy, waste of time undercard that's going to be.

Abner Mares is off of next weekend's Pavlik-Hopkins undercard, where he was scheduled to fight Luis Melendez in a fight that really could have been pretty exciting. Mares suffered a torn retina this week in training, and underwent surgery. Hey, no phantom injury or B.S. about that. Nothing you can do. These things happen.

Instead of Mares-Melendez, the opening bout of the televised portion of the pay-per-view will be a six-rounder featuring Golden Boy top prospect Daniel Jacobs (10-0, 9 KO) against Indianapolis fighter Jimmy Campbell (11-2, 8 KO). I'll take it. Jacobs is the real deal, and with such short notice, nothing bigger could be expected.