Share All sharing options for: Mondays with Boxers: October 13, 2008 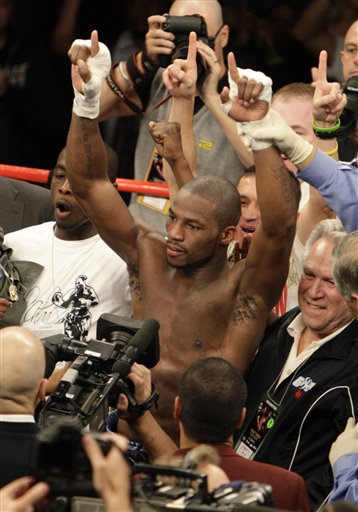 "He told me this is a gladiator sport and it can go any way. Floyd said, 'Be yourself, you're the better fighter.'" -- Chad Dawson on receiving a pre-fight call from Floyd Mayweather, Jr. (ESPN)

"Floyd told him he was the best pound-for-pound fighter in the world. They don't hang out or pal around, but Floyd really believes Chad is that good. Getting a compliment like that from Floyd is major." -- promoter Gary Shaw

"I was playing him. I worked him." -- Dawson on doing combat with Antonio Tarver

"I fought my fight, Chad fought his." -- Antonio Tarver

"He pushed me down. I was never hurt but he was a busier fighter than I was tonight." -- Tarver, who was knocked back and had his gloves touch the mat in the 12th round thanks to a right hook from Dawson

YOUR DREAMS WERE YOUR TICKET OUT

"If Samuel Peter didn't stop the fight, I have the feeling in the next two rounds, I would have knocked him out." -- Vitali Klitschko, new WBC heavyweight titleholder, on his dominant victory over Samuel Peter (AP)

"It was a one-way ticket, and I used my chance." -- Klitschko

"I need to think about it. I need to take care of my hand, because it is swollen." -- Klitschko, on plans for the future

"What a triumph that would be for us old guys." -- Don King, pressing hard to get Vitali to try and fight Lennox Lewis again

"Watch yourself now, brother." -- Wladimir Klitschko, responding to Vitali picking up one of Wladimir's belts at the post-fight press conference

"What are they going to do? Stuff Manny with tamales and beans, and reduce Oscar in the steam bath to bring them together? It's ridiculous. It's absurd." -- WBC president Jose Sulaiman

"You have two camps. The camp which is against the fight seems to be bigger than the one for it." -- Golden Boy CEO Richard Schaefer

"An offensive guy and a defensive veteran -- that's a perfect match." -- Bernard Hopkins, selling as best he can (BoxingScene.com)

"Can Bernard Hopkins derail the Mack truck? I'm going to flatten his tires, slow it up, and then it will conk out. A lot of people are concerned about me. I will be OK. I'm not a fool. I'm a thinker. I'm a guy who likes to take big challenges. I will beat him impressively and show the world Bernard Hopkins is a great champion." -- Hopkins

"That would be one of the biggest statements in the last 40 years in boxing." -- Kelly Pavlik, on what it would mean to knock Hopkins out

"What happens when he gets hit flush? Eventually, his defense is going to lapse a few times. I have to take advantage of that." -- Pavlik

"I promise I will knock him out." -- Vic Darchinyan on Cristian Mijares (Sydney Morning Herald)

"I've said that many times before big fights. Maldonado, Irene Pacheco, Kirilov -- I knocked them out. When I promise I will knock someone out, I keep my promise." -- Darchinyan

"I promise that after this fight you will be hearing a lot more about me." -- Billy Dib on his bout with Steven Luevano on October 18

"I am going to make this fight exciting and have people on the edge of their seat. To be honest, I want to steal the spotlight from Bernard." -- Dib

"I started at 140 and mentally I know that is where I should be. I'm planning to go back there and dominate. I stay ready. I'll be ready. I'm just here to show my fans I am still dominant and I can put on good fights and give great entertainment." -- Zab Judah, on his November 8 return to the ring and desire to return to junior welterweight soon (ESPN)

"If down the road Andreas sees his cardiologist and has a change of heart, call Square Ring and make the fight happen." -- Dmitriy Salita on WBA junior welterweight titlist Andreas Kotelnik, who pulled out of a November 8 fight at first because of a rib injury, and later because of money (according to Kotelnik) (Seconds Out)