Share All sharing options for: Graham Earl likely done after another TKO loss 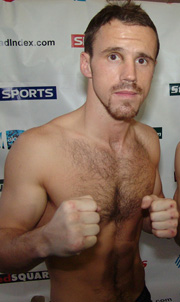 British fighter Graham Earl's career "is likely over," say all reports out of York Hall in Bethnal Green, as Earl was manhandled in the first round by Henry Castle today, losing his third straight by TKO.

The tough, scrapping lightweight is only 30 years old, but it appears clear to all that his 2007 war with Michael Katsidis (BLH feature from last year) has taken too big a toll on his body and perhaps his mind, as well.

When Katsidis beat Earl, he had to beat a man that refused to quit, and was allowed to continue by referee Mickey Vann even when his corner was calling for an early stoppage. Earl fought with the heart of a lion that night, though he was clearly outgunned by the more powerful Aussie. It was the fight that put Katsidis on the map outside of Australia.

He re-entered the ring ten months later, facing British phenom Amir Khan. Khan beat him in 1:12. Castle (19-4, 11 KO) was not Katsidis or Khan -- he was a guy stepping up to face Earl, a fighter who Castle's handlers likely thought was finished going into the fight. Earl and team probably thought Castle was a nice comeback fight, a way to get back on track. Turns out the Castle camp would be right if those were the prevailing thoughts.

The former British lightweight champion, Earl would retire with a career record of 25-4 (12).

If he does indeed retire, Bad Left Hook wishes Graham Earl nothing but the best with whatever he does beyond being a fighter. He was an admirable man in the ring.