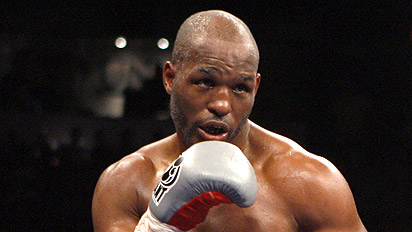 We will have a LOT more tomorrow evening, but for now, let's just put it this way, and I'm not going to sugarcoat it or put it mildly:

This, in my opinion, was the greatest performance of the 43-year old Hopkins' career. I doubted his legs. I doubted him because of his age. I doubted him, as many have at various times.

Never, ever again. Never bet against Bernard Hopkins. I said it the other day, but I didn't take my own advice. I should have. Hopkins took Kelly Pavlik to boxing school tonight, and taught him an entire textbook's lessons.

All hats off to Bernard Hopkins, one of the genuine living legends of this sport. He is an all-time great, a no-doubt Hall of Famer, and a seriously brilliant boxer.

They're talking to Pavlik now -- I don't know if I've ever seen a fighter look so dejected. "I'm not makin' no excuses -- the guy fought good and he gave me a lesson."

Classy in victory, humble in defeat. Get back to work, Ghost, and we can't wait for your return.

Other results from the PPV card:

* Marco Antonio Rubio beat Enrique Ornelas via split decision in a hard-fought, grueling battle that I had scored for Ornelas (116-112), but with so many close rounds that I cannot at all argue with Rubio's victory. Pavlik-Rubio may now be on deck, as Rubio is the WBC mandatory.

* Steven Luevano out-pointed Billy Dib in a horrible, awful fight. May Billy Dib never see the light of American TV again. I mean it. Shane Mosley should be ashamed for pushing this guy within Golden Boy, and owes the paying public an apology for the crap we got out of him. To quote Larry Merchant, "Is 'Dib' Australian for 'nothing'?"

* Daniel Jacobs predictably blew out Tyrone Watson in the first round, the same Tyrone Watson that was owned by Fernando Guerrero 15 days ago.

Again, final word: Bernard Hopkins. All respect in the world.