10 Points of Interest: Pavlik-Hopkins and undercard

Share All sharing options for: 10 Points of Interest: Pavlik-Hopkins and undercard 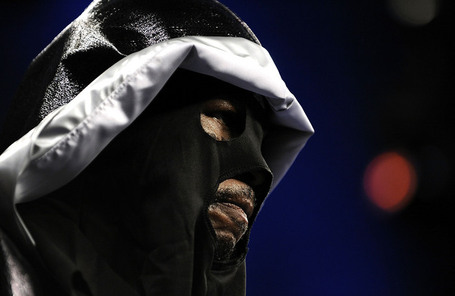 I thought I'd be in bed by now, but I'm still up, so we'll get a jump on tomorrow's thoughts and put them together right now.

In April, Joe Calzaghe ran Bernard Hopkins ragged, testing his age, his conditioning, and his ability to counter-punch.

Last night, Kelly Pavlik meant to do the same, but that gameplan never had a chance to get off the ground. Hopkins came out firing at Pavlik right away, and owned the ring for a full 12 rounds.

You cannot complain that Hopkins was boring, because he not only fought hard and brought action, but he absolutely made Pavlik look like a bum fighter, which Pavlik is not.

It was another defiant action from the man who has re-written the books on going against boxing's establishment, and yet another night where he proved every doubter amazingly wrong. It's been quite a while since he's truly fought as "The Executioner" of old. Even when he dominated Antonio Tarver and made him look foolish, it didn't resonate the way this win does.

Hopkins, 43, demolished a strong, damn good fighter 17 years his junior. He outworked him, outlanded him, and beat him to the punch. His footwork made Pavlik look like Samuel Peter. Pavlik chased, but couldn't catch the old man.

If Bernard fights on, which he does not need to, don't doubt him again. I'm talking as much to myself as anyone else.

Maybe it was the weight. There's no denying Pavlik looked slower in every possible way fighting at 170 pounds. Frankly, I didn't think he looked that great in February against Taylor at 164.

Pavlik and Jack Loew can talk all they want about how it's better to not drain weight and get down to 160, but all fighters, really, drain weight to get to their limit. At 160, Pavlik is much stronger than most of the other fighters, has a lot of snap on his shots, and moves around better. Getting down to 160 with proper training just makes him a very strong 160. Pavlik says he walks around at 175, so he only dropped a few pounds.

His conditioning trainer says they bulked him up and brought him down, but he really didn't come down much. Not draining the weight probably made Pavlik feel sluggish in there. He certainly looked it.

The loss does not ruin Kelly Pavlik's career, but the dejected, thoroughly beaten look on his face after the fight does worry me. Pavlik has had a lot thrust upon him; he's been called the emerging centerpiece of American boxing. He was basically considered the savior of his hometown, said by all that live in Youngstown that he was the best thing to happen to the city.

He was a God at home. He should remain one. Because he's a fantastic fighter, a gracious professional, and a classy guy that did his best. He came up short. It happens.

It happened because he chose to fight great competition instead of waiting around for something else or fighting a lesser opponent for the second straight time. He took his mandatory with Gary Lockett and blew him out. He would've caught flak for taking another "lackluster" fight. He took a chance fighting Hopkins. It didn't pay off, though in the long term, Pavlik learned something tonight, probably.

I think Jack Loew seems like a hell of a nice guy. No doubt Kelly Pavlik owes Loew a lot.

But is Jack Loew REALLY qualified to essentially single-handedly train a world champion fighter? I'm not saying one loss means Pavlik should replace Loew. Not at all. But adding a second to his team, a name guy that can give him another set of eyes and ears -- that might not hurt. We've seen Eddie Chambers bring in Buddy McGirt as a second to his father, and Bernard Hopkins kept Nazim Richardson in his corner while he recovered from his stroke, and he also has John David Jackson around. Adding an experienced, qualified, big fight veteran guy in the corner might be a decent idea. Loew is what he is, but he also has exactly one pro fighter under his care.

5. Billy Dib and the great attempt to single-handedly ruin the show

Dib was so awful in his challenge to WBO featherweight titlist Steven Luevano that I felt bad for Luevano, who is now in a contender for Worst Fight of the Year, made even more excruciating because we all paid $50 and that was part of the money we spent. Dib is a loudmouth punk, can't punch, and vastly overrates his own stylish defensive ability. How Shane Mosley backs this chump I'll never figure out.

Dib is not without talent or flair, but he's never beaten anyone and didn't deserve this shot to begin with. Luevano outclassed him in the most bowling shoe ugly of ways. Hopefully Luevano can get a good fight, because he deserves better than that stinkfest.

6. Rubio-Ornelas: Fight of the Night

It didn't mean as much and wasn't as memorable as the main event, but pound-for-pound, the fight of the night was Marco Antonio Rubio's hard-fought split decision win over Enrique Ornelas. A blistering, edge-of-your-seat final couple of rounds, with Ornelas wobbling and miraculously staying on his feet, finished a fight that was all hard-punching from round one through twelve.

In short, it was exactly the slugfest, throwback fight many thought it could be, and it was damn fun to watch. The Atlantic City crowd wasn't the same people that used to cover the seats for Arturo Gatti; had it been those folks, the fight would have gotten the live reaction it deserved. Instead, Rubio and Ornelas, leaving it all in the ring in the WBC middleweight eliminator, were given a tepid response during the fight and a mild ovation afterward. They deserved better. They fought with a lot of guts. It wasn't Vazquez-Marquez or anything, but it was hard-hitting stuff.

That'll probably be the last time we see "T.T." on TV, unless he scrapes into an ESPN card sometime. Twice in fifteen days we saw him knocked off, first by Fernando Guerrero on ShoBox, and now wasted in a round by the very exciting Daniel Jacobs, who looks like Yuriorkis Gamboa with some defensive ability. Jacobs has yet to be tested at all, but he's got serious skills.

With his win over Ornelas, Rubio becomes the mandatory WBC challenger, one of the two alphabet belts Pavlik owns. Rubio would be a fine next opponent for Pavlik, even if it meant they'd have to go on Boxing After Dark. Rubio is a straightforward fighter, not in Pavlik's league, and would give Kelly a chance to get his groove back. He'd also come out swinging and give it his best shot, the same as Gary Lockett did, but Rubio is better than Lockett. He showed against Ornelas he can take a shot or ten; I like the fight for both parties, and think it could be a hell of a scrap.

For Hopkins, this was one of his best performances. Ever. Period. It was also what I would rank right now as the performance of the year. Nobody has owned a night the way Bernard did last night. When he stared down the ringside media, one-by-one, writers and commentators that picked him to lose (many by knockout for the first time ever), I was one of those that got some form of chills.

Bernard Hopkins goes beyond his era, which few fighters really do. He's an all-time great.

Does this one beat his dominant performance against Tito Trinidad seven years ago? I have to say it does. Trinidad was never a great middleweight. And Bernard wasn't at an age that should be considered past his prime.

To me, I'll say it again: this was Bernard's greatest fight ever. He was unbelievable.

I'm still a huge believer in Kelly Pavlik, and a huge fan. I can't wait to see him get back in the ring. All this talk of moving past middleweight should be put on the backburner. Defend your championship, Ghost. Get back on the horse.