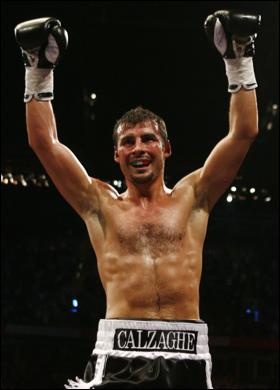 I'm at the point now as a boxing fan that if you want to consider me a guy that has a bias against Joe Calzaghe, go ahead. The man simply refuses to shut his yap. Here's his latest, which goes back to things he's said before, and is just as easily picked apart. Via Sporting Life:

Calzaghe, who beat Hopkins back in April, said: "I said all along Kelly Pavlik was overrated, overhyped and hadn't done anything in his career to a warrant a fight with me.

"This was evident Saturday night when Hopkins destroyed and exposed him for what he is.

"That is why I wasn't going to waste my time fighting him and went straight to a bout with Roy Jones who has proved himself time and time again that he is one of the greatest fighters in our era. I have been a champion for 11 years and I am only interested in fighting legends.

"My boxing career and record speaks for itself. This will be the biggest fight of my career as I am fighting one of the best, at the best place to fight."

Cram it, Joe. You're the same gutsy, never-turn-'em-down cham-peen of the sport that has said repeatedly you offered Kelly Pavlik a fight after you beat Jeff Lacy. Before Pavlik ever beat Taylor or Miranda or Lockett or even Jose Luis freaking Zertuche.

You're the same fighter that is trying -- and failing miserably -- to convince the boxing public that you're facing Roy Jones, Jr., on November 8, and not a hollow shell of the fighter Roy Jones once was.

Maybe if you still had Frank Warren covering for you, you wouldn't be struggling so massively to sell tickets at Madison Square Garden for this insulting card you and Roy have put together. Be proud of it, Joe, while you discover why fighters have promoters.

What do you think the U.S. PPV sales will be, Joe? What have you got to say about the fact that it took you forever and a day to leave your comfort zone for a single freaking fight?

What have you got to say about fighting a 40-year old man that hasn't beaten anyone in YEARS, when you could have made big money to fight Kelly Pavlik -- and since you're so confident you'd have beaten him, there's no excuse for it.

This isn't about talent. Joe Calzaghe has it in spades. This is about character, or a lack thereof. If Pavlik sucks so much, why did you offer an unknown middleweight a chance to fight you years ago, before he was anybody? And no doubt he'd have had to go to your backyard to do it. (Not that Calzaghe coming to the States to fight nobody Pavlik would have made any sense.)

As a fighter, I think Calzaghe is class, one of the best in the world, and that he's been in that company for a long time now. As a personality, I just can't respect him anymore. This is the same big talkin' crap I'd take Antonio Tarver to task over, and it cannot be excused just because Calzaghe is unbeaten with his fluffed-up record. When I said great fighters lose fights because they fight great opposition, I'll tell you something else: Joe Calzaghe doesn't qualify.

The most disappointing thing about this is it doesn't have to be this way. For whatever reason (fan perception, probably), Calzaghe has felt this need to attack Kelly Pavlik in recent months. I don't think Joe Calzaghe ducked Pavlik -- you can't duck a guy that's never fought your weight before. Calzaghe chose to fight Roy. That's all fine and good. When he says he wants to only fight legends, then fine. Great. That's OK.

But why talk about Pavlik almost exclusively and say he sucks, while also noting your willingness to fight him years before he mattered, and also having been so kind and allegedly impressed by his performance when he beat Taylor for the middleweight championship?

This isn't about selling a fight, because Calzaghe and Pavlik aren't going to fight. This isn't hype. This is jealousy, I think, from Calzaghe. Jealousy over the fact that he's not gotten the same amount of hype or fan excitement generated even once in his career that Kelly Pavlik has stirred up in the last year. Calzaghe may well have deserved better, but as Warren and others have said, he never went that extra mile to get it. And he's pulled out of more fights and ignored more fighters than you can shake a stick at.

But, hey, have fun with your crap card on November 8, Joe. I guarantee more people were watching last night than will be when you and Roy get together at Madison Square Garden. Too bad there isn't more to say about that fight and the atrocious undercard you're insulting the paying public with than there is about you not fighting Kelly Pavlik.