Share All sharing options for: Tuesdays with Boxers: October 21, 2008

OK, a day late, but we'll all survive. It's Bernard's week. 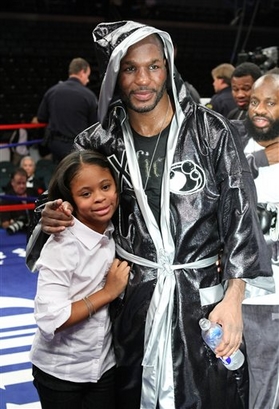 IT'S YOUR THING, BERNARD

"I think this was my best performance -- better than Tarver, better than Trinidad, better than Oscar. I am extremely happy tonight. Ninety percent of the media picked Pavlik. I always appreciate naysayers. That is what motivates me -- when people are against me. I don't wish I was like that, but that's the way it is." -- the ageless Bernard Hopkins, who shocked the world by dominating Kelly Pavlik on Saturday night (ESPN)

"I just couldn't get off. I don't know why. It was not his slickness. I just couldn't throw a jab, a double jab. I couldn't do what I was used to doing. We'll go back to the drawing board. It just wasn't me tonight. I will be more comfortable going back to 160." -- Kelly Pavlik

"He's a great fighter, but I knew my style and quickness were underrated and I was going give him problems. I wanted him to lead so I could do what I love to do -- counterpunch. He kept coming forward, which was an advantage to me. He was really heavy-handed. I could feel his power, but he never hurt me. I didn't get hit flush." -- Hopkins

"I wanted to pick it up, step it up, and I really wanted to stop him. I was definitely going for the knockout, but he's tough." -- Hopkins

"I would fight Roy in a heartbeat." -- Hopkins on a potential, 15 years-in-the-making rematch with Roy Jones, Jr.

"Don't let this fight destroy you. You're a great middleweight champion. You have a great heart. Keep your head up. Keep fighting. You have to learn one thing. You have to learn that slickness that black fighters have and then you'll really be a great champion. I don't want you to quit. If I have to go to your house and take you to the gym, I will." -- an edited version of Hopkins speaking to Pavlik after the scores were read

"I'm tired of proving myself!" -- Hopkins, staring down at press row after the fight

TELL US HOW YOU REALLY FEEL

"I oppose 100 percent this ultimate fighting. It has taken boxing to the era of the caveman and the Roman circus." -- WBC kingpin Jose Sulaiman (Reuters)

"These are not ancient times. This fighting is fed to those fans who like aggression, blood and illegality. They are not boxing fans. Boxing fans have class." -- Sulaiman, who apparently lives on a different f'ing planet than I do

"Thirty-five years ago this was a savage but legalised sport but we have achieved so much. Now we have safety, justice, there is no more favouritism by judges." -- Sulaiman, who is the man that gave Oscar Larios a world title; Oscar Larios, banned in the U.S. because of medical concerns; Sulaiman, the man who has pulled more B.S. stunts than anyone in the sport. Give me a break.

"Luevano fought like a warrior." -- Dib, clearly not using that word the way most would

"The gameplan going in was to wait and make him come toward me. So I waited and when he came in, I was able to counter and connect." -- Dib; WHEN?

"You've got to love what you do and I feel like quitting boxing every day because I'm not loving it anymore." -- Enzo Calzaghe, exhibiting the character trait of everyone wealthy, who believes that you "have to love what you do"; has Enzo ever met a supermarket cashier? (BBC)

"Why? It could be because I've achieved every goal in boxing and won every award there is to be won?" -- Enzo, a humble man

"Or could it be the ups and downs of boxing politics." -- Enzo

"But these days I've got to give myself a kick up the backside every morning to make myself enjoy it." -- Enzo, really pouring it on

"I'm not ready to retire but I can't stand it any more. It's a shame I feel like this after everything I have given to boxing." -- Enzo, a very, very, very humble man, who has given things to boxing and received so little back

"I mean he is a decent fighter, I don't think he is a great fighter. I think he is decent." -- Paulie Malignaggi on world junior welterweight champion Ricky Hatton, his Nov. 22 opponent (Doghouse Boxing)

"Why is he the only fighter in boxing history that has to be a problem for the referee to break him up? When somebody is holding you, you break. It's pretty obvious." -- Malignaggi

"Hatton is going to be outclassed when he fights me." -- Malignaggi

"I don't take it as a sign of disrespect, but I do think he is overlooking me." -- Malignaggi, on Hatton wanting to fight the Oscar-Pacquiao winner

"Boxers are the poorest and least educated among us, and the most exploited athletes in our nation." -- GOP Presidentical candidate Sen. John McCain; hey don't generalize or anything, John (Wall Street Journal)

"That fight is not getting me excited. I won the first fight and it wasn't a great fight to watch. Sometimes styles make fights and there are styles that gel. Our styles did not gel and I don't think a second fight would be more exciting. It would probably be more boring. I've beaten him and I wouldn't want to go over old ground." -- Joe Calzaghe on a potential rematch with Bernard Hopkins (AFP)

"My goal is to hold world titles in both boxing and MMA." -- former EliteXC lightweight champion KJ Noons, whose career boxing record is 7-1 (5), and who has been accused by many MMA fans of ducking Nick Diaz (The Sweet Science)

"I'd love to knock him out, but a victory is a victory." -- IBF super middleweight titlist Lucian Bute, on his upcoming fight with Librado Andrade (Star-Ledger)