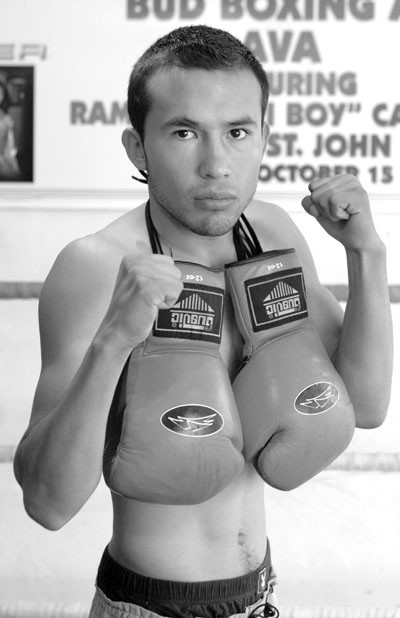 I had not been following the boxing news too closely since last week, which meant that I missed the sad passing of young Mexican featherweight Daniel Aguillon. Aguillon had been in a coma after a knockout blow to the jaw rendered him unconscious with 40 seconds left in the fight last Wednesday against fellow Mexican Alejandro Sanabria in Polanco, Mexico.

Aguillon was just two months into his 24th year on this earth. His pro career tragically ends with a record of 16-4-2, with nine knockouts.

There is never anything too poetic that can be said when a fighter dies in the ring. It is the horrifying risk every fighter takes. If a man or woman in this sport is lucky, he or she will fight a great career, make some money, leave a legacy, and retire without too many problems.

There are many, of course, that aren't so lucky. Mr. Aguillon is regretfully among the least lucky of all, a warrior that leaves this world on his shield.

You know, when a fighter passes away due to the risks of the sport, I imagine the reaction that people outside of the sport must have, those that aren't fans, those that find the entire idea of fighting for a living, no matter how safe or regulated, to be barbaric. I have never had someone ask me how I can watch a sport, and love a sport, like this one, or like mixed martial arts or kickboxing; any combat sport where there is always a very real chance that something horrible can happen at any moment, in any fight, on any punch or kick or slam.

I imagine, though, that I'd tell them that I, personally, cannot even fathom the bravery it takes to climb into a ring looking to hurt another combatant as he tries to hurt me just the same. In this regard, there is nothing in my heart but respect for anyone that gets in there. It fascinates me, it entices me, and above all, it leaves me in awe.

Daniel Aguillon was a fighter. That is what he did for a living. Mr. Aguillon will be remembered fondly by those that knew and loved him, I am sure, and though tragic, his death is not without purpose. Hopefully, he loved the sport, and was proud of his career. Hopefully, he is at peace now.

Rest in peace, Daniel -- boxing won't forget you, even if we barely got a chance to know you.