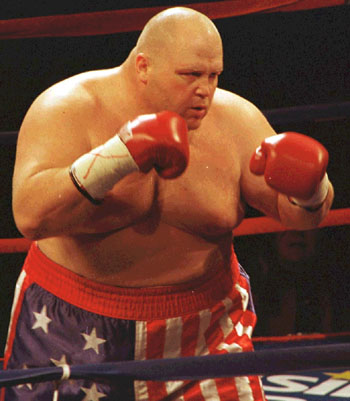 Hey, good news for Evander Holyfield: he's not going to jail! The former heavyweight champ has some child support issues that still need to be settled within three years (a $100,000 college fund for his 10-year old son), but for now, his home is intact, and this is open but, for the most part, settled.

The sad thing is that this means Holyfield, most likely, has to fight on. Promotional appearances and conventions and stuff like that just don't pay the type of scratch Evander is used to, and lifestyles are hard to change, man.

Yes, that's a photo of Butterbean. No, I have no reason for using it. Butterbean is cool. Someone's gotta be the king of the four-rounders.

If you've missed it, Roy Jones, Jr., is using ESPN.com to discuss his training camp. Parts one and two are up. No word from Roy on how many seats at MSG will be papered on November 8.

I know there's been a lot of Kelly Pavlik talk already, but I firmly believe anyone jumping ship on this guy is going to find themselves trying to catch up with the boat as it sails back out of port soon. The big quote from the HBO Countdown to Pavlik-Hopkins show, to me, was Jim Lampley saying, "And there's the feeling that it's not a mirage, it's real," in regard to Pavlik's hype, for lack of a better word.

I think it is still real. Pavlik was taken to the woodshed by a master craftsman, but it's not the end of the road. He'll get back in there as the middleweight champion, where he belongs for the time being. I thought all the talk of Pavlik moving up in weight seemed a bit odd; "premature" wasn't the word I thought at the time, but now it definitely seems to be that way. Marco Antonio Rubio is probably Pavlik's next opponent, and a rugged, straightforward fighter like Rubio makes for a great comeback opponent. If losses single-handedly make fighters "overrated" and that single loss means every win before is now crap, hype, and useless, then I guess the only great fighters are Rocky Marciano, Floyd Mayweather, Jr., and Joe Calzaghe. Pavlik lost. Pavlik got destroyed by a 43-year old man. It happened. Let's get on with life, because Pavlik remains one of the most genuine, likeable guys in boxing.

Who's leading the race for Fighter of the Year right now? I said the other day that Cristian Mijares has made a strong case for himself, and a win over Vic Darchinyan will give him more fuel. Should Manny Pacquiao defeat Oscar de la Hoya on December 6, he's got another great case with wins over David Diaz and Juan Manuel Marquez. If Joe Calzaghe beats Jones, he'll have his supporters. Performance of the Year (Hopkins over Pavlik), Comeback of the Year (Vitali Klitschko) and Fight of the Year (Vazquez-Marquez III) seem like shoo-ins right now. But Fighter of the Year is still up for grabs. I know he doesn't thrill like people wish he would, but Wladimir Klitschko is in the running with dominant wins over Sultan Ibragimov and Tony Thompson, plus decorated amateur Alexander Povetkin coming up in December. Really, though, I think the race is Pacquiao v. Mijares right now.

BoxRec.com has their own system for fighter rankings, but some are truly bizarre. Monte Barrett is the No. 7 heavyweight in the world? Israel Vazquez (love the guy, but come on) is the No. 1 fighter, pound-for-pound? It's flawed like anything. Never trust anyone!

Wondering what Joan Guzman is up to? Hey, nobody else really was anymore, either. Guzman will return to the ring on December 20 in his home country, the Dominican Republic, to face WBA Fedalatin lightweight titleholder Ameth Diaz (25-7, 19 KO, five losses by KO). Aaaand, the bout is a -- wait for it -- WBA eliminator. Yeah, great job, WBA. Guzman has tried to fight at 135 officially once in his career and cost promoters money, cost a venue money, gave Showtime grief, and led Nate Campbell into declaring bankruptcy. Let's reward him right away with a promised title shot if he can beat some guy nobody's ever heard of on his own turf. Excellent idea. Schmucks.

If you missed it, Humberto Soto's return to the ring on October 11 went as most would have expected, with Soto beating up on former featherweight fringe contender Gamaliel Diaz, forcing Diaz to quit after 11 rounds. Soto floored his opponent in the first round, and Diaz lost two points for holding in the tenth. Soto is now the interim WBC junior lightweight titlist. He should thank the WBC for this time giving him the right referee in their quest to put that title on him. Laurence Cole knew what was up.

I wonder how Vernon Forrest's search for a big money fight is going?

A little respect for Chris John is in order. For the first time since fighting Juan Manuel Marquez in 2006 (but refusing to leave Indonesia to do it and getting some home cookin', in my view), John will be facing a legitimate opponent tomorrow night, when he meets Hiroyuki Enoki in Japan. John (41-0-1, 22 KO) has been on a tear taking on the easiest challenges he can find since Marquez, as he's beaten Renan Acosta, Jose Rojas, Zaiki Takemoto and Renoit Caballero. Enoki (27-0-2, 19 KO) is coming off of a draw against Takahiro Aoh.

Speaking of Aoh, he lost a 12-round split decision to WBC featherweight titleholder Oscar Larios this past Thursday. How Jose Sulaiman can get all righteous about MMA being "savage" and "unsafe" and whatever else while he parades Oscar Larios around as a champion is not just beyond me, but it actually angers me. Sulaiman is as full of s*** as they come in boxing, and that's no small task.

Bernard Hopkins has inspired at least one other athlete this past week, as Newcastle United midfielder Joey Barton says he's given up alcohol after watching Hopkins defeat Kelly Pavlik on Saturday. Barton has had a drinking problem for a good while now, and wound up doing six months in prison. Quote: "I was watching the boxing the other night and saw Bernard Hopkins who was jailed for four years but still managed to turn his life around and I have to take inspiration from that. I can be a shining beacon for kids who have been in trouble before like myself. People have messed up, but I can hopefully show that if you knuckle down and try to do the right things then time is a great healer." Good luck, Joey.

For those of you that can never get enough Jorge Arce brawls, he'll be facing Isidro Garcia on the Chavez-Vanda II undercard on November 1, which is another Top Rank "Latin Fury" pay-per-view. If it weren't for Mijares-Darchinyan on Showtime that night, I'd probably order that show. Chavez-Vanda I was an excellent fight, and Arce's always good for excitement. I wish Arce's last fight against Rafael Concepcion had been seen by more folks; what a war that was.

Dan Rafael of ESPN has noted recently that the death of Wednesday Night Fights absolutely does not mean that Friday Night Fights will have a better budget to score more attractive fights, so I guess in all honesty, you can largely forget about ESPN as a TV home for boxing. I don't say that to be disrespectful of the fighters on the show, but it's a bad show. You get the rare good fight out of it, and sometimes you get something sensational like the old Micky Ward scraps or Brian Vera upsetting Andy Lee earlier this year, but let's be honest and call a spade a spade. Most of the fights are lopsided mismatches with prospects taking on wayward veterans, or it's a couple of wayward veterans fighting one another when ESPN can't land anything better that week. I hate to dump on any boxing on TV, but ESPN's cards do the sport few favors.

I'll never forget when Chicago White Sox pitcher Mark Buehrle was in the middle of a no-hitter, and people were scrambling to find national coverage. Someone said, "Jesus, this guy's throwing a no-hitter and ESPN2 has boxing on." Most of the ESPN cards, to an outsider, look like low-rent club shows. It's one of the things that I believe fuels this idea that boxing is somehow dead or on the way out. Boxing is going nowhere, but free TV coverage wouldn't tell you that.

Does "Calzaghe-Jones 24/7" sound as uninspiring to anyone else as it does to me? Not a Mayweather in sight, and Roy's been on his best behavior lately, like a guy that's just happy to be in the spotlight one last time.