Share All sharing options for: John beats Enoki; other results 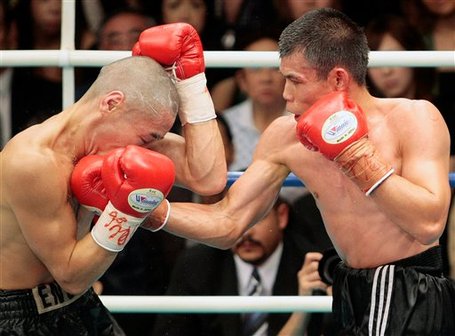 As pictured above, WBA featherweight titlist Chris John beat challenger Hiroyuki Enoki via unanimous decision today, with scores of 118-110 (twice) and 117-111. John is now 42-0-1 (22), while Enoki falls to 27-1-2 (19). It's enough to make you wish John would fight good opponents more often. He's a guy whose skills are real, but it's tough to believe sometimes given his usual level of opposition. John against Steven Luevano would be a treat, I think.

On Wednesday, Filipino fighter Jimrex Jaca lost his third straight, getting stopped in the second round against unbeaten Saddam Kietyongyuth. After a 21-0 career start, Jaca has gone 7-6-3 in his last 16 fights. I think it's safe to say he's just a knockaround guy. I've got to say, I expected a little more out of a guy that held his own against Juan Manuel Marquez for five rounds or so, when he was clearly out of his depth. Oh well.

Also on Wednesday in New York City, veterans Randall Bailey and DeMarcus "Chop-Chop" Corley. Bailey (38-6, 34 KO) won an eight-round decision, his third straight victory. It was Corley's sixth straight loss, and ninth in his last 12 fights. Probably time to hang it up, Chop-Chop.

On the undercard, Olympian Demetrius Andrade made his pro debut, stopping Patrick Cape in two rounds. Andrade weighed in at 155 pounds, with Cape six and a half pounds lighter.