Miguel Cotto the latest to speak against De la Hoya-Pacquiao

Share All sharing options for: Miguel Cotto the latest to speak against De la Hoya-Pacquiao 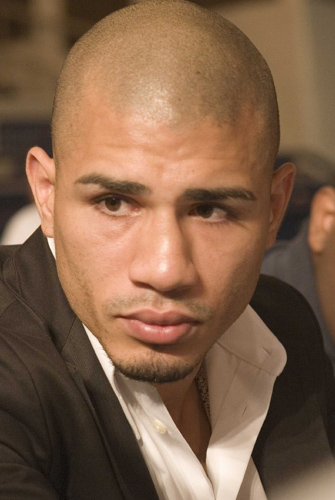 Speaking with Primera Hora, welterweight star Miguel Cotto has joined the outspoken team in the boxing community that has come out against the December 6 money showdown between Oscar de la Hoya and Manny Pacquiao.

My Spanish is not so great, so if I'm way off then forgive me (and help me out!), but Cotto says:

"This fight is an example where people realize how far boxing has fallen. The sport is where it is right now because of fights like this, because of fighters like de la Hoya."

"(Oscar) avoids the fighters that could be dangerous for him and prefers to fight Pacquiao..."

"When Thomas Hearns, Marvin Hagler, and Sugar Ray Leonard faced each other, those were glorious years for boxing..."

We've now got both Cotto and Margarito against this fight, perhaps because neither of them are fighting Oscar for big bucks instead. In both cases, it smacks of some amount of jealousy that it's Manny Pacquiao making the huge money in December.

Listen, I'd rather see Oscar-Margarito than Oscar-Manny, but we all know the same money isn't there. Oscar-Cotto would even be a preferable fight; we all know, again, that the money is not the same as it is for a fight with Pacquiao.

The Hearns/Hagler/Leonard (and you can include Duran, too) era WAS great. It's also over. Modern boxers have got to let the 1980s go. I wasn't old enough to care in 1987 (I was five), when Leonard returned from three years off to move up 13 pounds and fight Hagler, but do these guys forget or just not know that a LOT of people were concerned that Leonard was going to get seriously hurt by Hagler? Didn't happen, of course.

It's not quite the same as Oscar-Pacquiao. For one thing, both are active fighters, and for another thing, this size differential is bigger. Oscar's a lot taller than Manny, while Hagler was actually shorter than Leonard, and was far shorter than the 6'1" Hearns.

I don't really have a point, just that fighters speaking out against the biggest money fight in the sport right now may be "keeping it real," but they also aren't helping. Money will make the world go 'round -- it made Hagler-Leonard, you realize.

I don't love the fight, and I've yet to fully warm to it. What I have warmed to, however, is the fact that it's happening. No amount of kvetching and hootin' and hollerin' is going to take it off the calendar. So why keep on nagging? It is what it is, a spectacle to close the year. Big fights do help boxing. This is one of 'em.