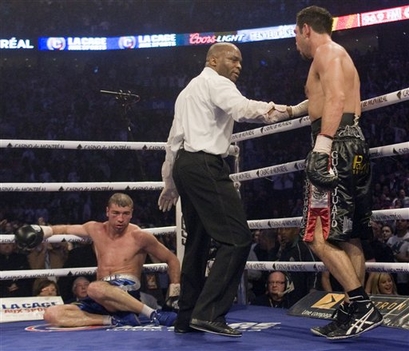 I realize this is rambling, semi-incoherent, and probably doesn't even make a lot of sense if you didn't see the fight. For that, I apologize. But I am madder than hell about how this fight finished.

I am going to try to keep this clean because I know people read at work, I know there's a chance kids read this blog, and because I only curse during the heat of the moment of a fight. That's the pure boxing nut in me coming out. I certainly let loose at the end of tonight's main event in the round-by-round in the post below.

Let's be all Quentin Tarantino-y and start at the end.

Steve Farhood: "Do you feel you were cheated?"

What happened in Montreal tonight ruined an amazing finish to a good fight, one that had featured Lucian Bute -- who did nothing wrong tonight and is a hell of a fighter -- outclassing the tough, workmanlike Librado Andrade.

Bute peppered with rights and lefts all night, and lost only one round before the final three minutes. He stung the seemingly-indestructible Andrade on numerous occasions. He fought great. He largely cut Andrade off, didn't let him get more than one shot at any given moment, and did exactly what he's known for doing. He boxed beautifully.

But in the final moments of this fight, in a GREAT 12th round with Andrade going for broke, Bute exhausted, and finally floored with a massive right hand, Montreal referee Marlon B. Wright disgraced boxing with an historically awful display.

First of all, and nobody's even talking about this, Bute was held up by the ropes twice before he finally went down.

I'm not one to start the boxing conspiracy theories or the favoritism B.S., but if this one doesn't stink to you, I don't know what to tell you. Bute collapsed under the pressure and was knocked out. A proper count and he does not get up. Instead, Librado Andrade is punished for standing three or four feet away from a neutral corner, and Marlon B. Wright turns what should have been a ten count into almost a 30 count.

This was Marlon B. Wright's fifth world title fight as a referee. Let's hope it's his last. Joe Cortez, you've got some competition. I'm not even saying Wright was anti-Andrade, really, or trying so much to help Bute. Maybe he was, but that's not the most bothersome aspect to me.

The worst part of it is that a referee in a world title fight lost control of himself, screamed at a fighter that had just knocked a man out, and let it dictate the outcome of the fight. Instead of fists doing the talking, an incompetent referee does it all.

Librado Andrade deserved better. Even Lucian Bute deserved better. Hey, maybe if the referee starts the count properly, Bute gets up quicker. He looked out to me, but never doubt a fighter's resolve to stand up, hold himself up as long as he has to, and retain a title belt he worked hard to get.

Boxing deserved better. Marlon B. Wright, may you never work a world class fight again in your life.

If you watched the first 11 rounds of this fight and missed the final three minutes, you wouldn't want to see a rematch. There'd be no need. And I think if they do it again, one of two things happens.

2. Andrade presses him harder, earlier, and looks to wear him out, because he knows he can put him on the canvas.

And all respect to both fighters, who showed class before, during, and after the fight. Andrade wants a rematch, but doesn't think he'll get it. Bute at least gives lip service to fighting Andrade again, if he "has to." I hate that these fighters have a big night in their careers marred this way, but it happened, and it should not be a two-day outrage followed up by nobody doing anything about it. Someone has to actually act on this and make it as right as it can be made. I'm not even saying anything drastic; order a rematch. Reprimand Wright for failing at his job. Something has to be done.

Knowing boxing and the sanctioning bodies, nothing will, and life will go on as if none of this ever went down.