Share All sharing options for: Mondays with Boxers: October 27, 2008

Couldn't not have a major controversy this year, could we? 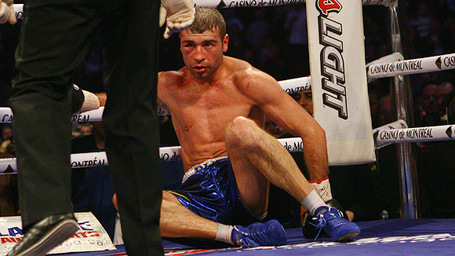 I BRAKE FOR MONSTER BUTE

"Oh, yes." -- super middleweight contender Librado Andrade, asked by Showtime's Steve Farhood if he thought he was robbed of a victory on Saturday night

"He was completely out." -- Andrade

"The fight was 30 seconds too long for Bute. He totally collapsed, and basically, the referee cost Andrade the title." -- Showtime color commentator Steve Farhood

"To me it looked like he beat the count, but the count was 24 instead of 10." -- Showtime commentator Nick Charles

QUIET, A MAN IS SPEAKING

"Oh, I loved it. It was a great fight. But look, this kid Pavlik is still the best middleweight in the world. Hopkins had the style to beat this kid. Style wise, talent wise, everything." -- the legendary Angelo Dundee, on Pavlik-Hopkins (The Sweet Science)

"Jones should win the decision. I do not see Calzaghe winning. You have to be rough to beat Jones. You have to a wrapper." -- Dundee, on Calzaghe-Jones

"A wrapper, you have to be a good wrapper. You know, oh, I am just talking fight language." -- Dundee, attempting and then not bothering to explain "wrapper"

"Well, the sport as a whole is getting a lot better. Let me just say this, I am proud of the promoters in boxing lately. There have been some very good fights. You see the sport needed that. And now, fans are slowly coming back to the sport. The promoters need to continue working together and make those blockbuster fights and I am looking forward to it." -- Angelo Dundee, one of the few people noticing and admitting that boxing has been much better the last two years

"I didn't know who this guy was before he started running his mouth. Sure, he knocked over a few cruiserweights, but let's be real. The cruiserweight division hasn't been worth a damn since about 1984." -- Monte Barrett, on upcoming opponent David Haye (Saddo Boxing)

"I'm willing to do David Haye a favor on November 15. I'll be kind to him and make sure I knock him out real fast so that he can scurry along back down to cruiserweight and forget this heavyweight thing ever happened." -- Barrett

"I'm not sure how vital a MySpace page is to the success of a fighter, but hey, he's got a lot of very pretty women on his MySpace page, so there's some perks there." -- Barrett

THE OTHER OTHER MARQUEZ

"After the morning weigh-in, I ate breakfast and went back to my room to rest. Around 11 there was banging on my door -- everybody knows not to bother a fighter resting for his fight -- and it was my promoter, Leon (Margules), who told me the fight was postponed." -- middleweight contender Raul Marquez, who will fight Arthur Abraham on November 8, a fight originally scheduled for October (Sporting Life)

"Something wasn't right all along. I knew he was having trouble making weight." -- Marquez

"Before the first weigh in, we both checked out our weight - I was on but he was over a half-pound. I was called for the official weigh in and made it; he was called but was 10 minutes late. He came in wearing a robe because he had to go in the sauna. Maybe he was sick but, if he really was, it was because of what he had to do to make weight." -- Marquez

I'M A BIG BOXING FAN, TOO

"On Saturday, Giants Coach Tom Coughlin showed his players not a Hollywood production but film of an actual event, the tape of a boxing match in July in which Antonio Margarito beat Miguel Cotto to win the World Boxing Association’s 147-pound title." -- Joe LaPointe (NY Times)

"I’m a big boxing fan. Cotto was supposed to win. Cotto hit Margarito 989 times in the fight. Margarito kept pushing and knocked him out." -- Giants running back Brandon Jacobs, who had seen the fight live

The above quote is included because it shows two things: (1) Brandon Jacobs is absurdly off, and (2) Joe LaPointe of the Times didn't feel it necessary enough to do a quick Google check for fight stats; not for a moment did LaPointe think, "989? That sounds like it's so outrageously high that Margarito probably would have been killed."

For the record, Cotto landed 280 of 655 punches thrown. So, this is sort of like me saying, "The Pittsburgh Steelers ran for 735 yards -- seriously! -- and the Giants still won yesterday. Amazing."

I would also note that I might assume Jacobs was being purposely overdramatic about the stat in a non-serious manner, but I think the fact is he confused Cotto's punches landed (989 in his feverish dream world) with how many Margarito threw (987).

"Because we are a pain in the ass." -- light heavyweight champion Joe Calzaghe, on why every fighter "needs a good woman" (Calzaghe-Jones 24/7)

"You know, just the way he -- he's the key. He was the key to opening the door. He's done everything for all the Filipino fighters and there's no … we can always thank him for everything. I mean, just endless thanks, because he's done a lot for the Philippines, for the Filipino community and for the Filipino fighter, for me as well. So, we just bow our head. We're just thankful for him being there." -- Nonito Donaire, trying to express what Manny Pacquiao has meant to Filipino boxing

"The sport is extinguishing boxing, the way a heel grinds a cigarette butt, and that's too bad. But it's also life, and MMA answers a call that boxing hasn't or can't. In a very short amount of time, MMA has gone from being considered a despicable bloodsport to being Main Street America." -- columnist Rick Morrisey on UFC 90 (Newsday)

"We're at a time now when the only recognizable names now are old men. And as much as you gotta respect Hopkins - he was brilliant, what he did with Pavlik - he's 43 years old. Oscar's an old man, Shane Mosley's an old man. We need great fights with new blood." -- Lou DiBella (MaxBoxing.com)