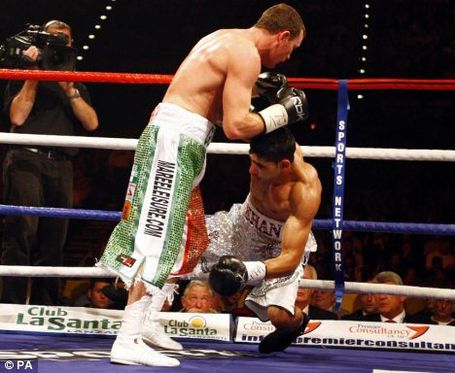 There are always several every year, and I think it'd be a good idea for us to share some that we've watched on YouTube or wherever else, the non-U.S. televised fights (or even some from ESPN that you might think are worth serious consideration) that just don't get a ton of hype.

Last year, for instance, there was the Michael Katsidis-Graham Earl war in London and the excellent rematch in France between O'Neil Bell and Jean-Marc Mormeck. Another great example from recent years would be the incredible clash between Mahyar Monshipour and Somsak Sithchatchawal, which wound up winning just about every Fight of the Year award or recognition in 2006, a fight no one in the States would have known much about had it not been for a wild amount of hype from hardcore fans online, plus ESPN's Dan Rafael championing the fight -- and rightfully so -- any time he got half a chance.

The first one I want to mention is the recent scrap between Rafael Concepcion and Jorge Arce in Mexico, which was televised on TV Azteca, though that channel is not exactly available in a great number of U.S. markets. I watched it through the power of the internet, because Arce's always good fun, and man was that worth staying up for. Talk about a slugfest.

The second is one where I'm actually going to post the YouTube vids for those that haven't seen it, because it was a blistering, cracking fight between then-unbeaten British phenom Amir Khan and veteran warrior Michael Gomez. This was a big fight in the U.K., and sure we diehard Americans cared, but our viewing options were, of course, limited, and this wasn't a fight that I feel has gotten its proper hype in most U.S. circles. That first round is positively Creed v. Balboa-esque; the outgunned, overmatched, tough and rugged veteran outclassed and floored by the highly-skilled hotshot, only to keep himself in the fight and come back roaring moments into the next round, testing the mettle of the young favorite. Absolutely outstanding.

Any on your minds? We're starting to get to that point where the best fights of the year will be put together here on Bad Left Hook, and it's time to really start spreading the word about some of those lesser-seen bouts. Get your picks in for consideration, and for the enjoyment of your fellow boxing fans.