Share All sharing options for: DuBoef: Negotiations moving for Rahman to replace Povetkin 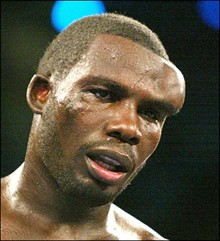 Top Rank President Todd DuBoef told BoxingScene.com's Rick Reeno that negotiations are in progress to match former WBC heavyweight titleholder Hasim Rahman against Wladimir Klitschko on Decmeber 13 in Germany. Rahman would be replacing Alexander Povetkin, who recently pulled out due to injury.

Rahman (45-6-2, 36 KO) hasn't fought since a no-contest against James Toney in their horrible July rematch, a fight that FOX Sports Net insultingly billed as being for "the world heavyweight championship," a goal neither man has been anywhere near in years. The fight was at first ruled a Toney TKO in the third round, but was later rightfully changed to a no contest by the California State Athletic Commission.

The 35-year old Baltimore native last fought with a recognized world title on the line against Oleg Maskaev in August 2006, losing via dramatic 12th round TKO. He has gone 4-0 since then, beating journeymen Taurus Sykes (a fight where Rahman was grossly out of shape), Dicky Ryan, Cerrone Fox and Zuri Lawrence, the amazing punchless heavyweight with a current career record of 24-14-4 with zero knockouts.

Rahman, of course, is best known for shockingly knocking out Lennox Lewis in 2001. Seven months after that win, Lewis got revenge by obliterating Rahman in four rounds. Rahman, frankly, has not been the same since. He was scheduled to face Vitali Klitschko at one point, but that was the fight where Vitali kept injuring himself and never actually made it to the ring, retiring early and leaving Rahman without a massively hyped fight.

I think the fight sucks, to be perfectly honest, but I understand that Wladimir wants to keep the date, fight for a third time in 2008, and stay active, and that he had a decent opponent lined up, and that guy bailed. It's not easy to find a replacement opponent for the world's No. 1 heavyweight on short notice; Rahman would be getting a chance to stun the world again and return to the great heights of the sport. Klitschko, more likely than not, would be getting a soft but name opponent.

Some people believe that Rahman would be a live dog. Probably goes without saying that I think Rahman gets jabbed for 12 rounds (or until he decides to quit) or he gets knocked out as soon as Klitschko engages. I do know that Wladimir could use a big performance; the win over Ibragimov was God awful, and the Tony Thompson fight was passable at best.