Peter Buckley, tomato can extraordinaire, set to bow out

Share All sharing options for: Peter Buckley, tomato can extraordinaire, set to bow out 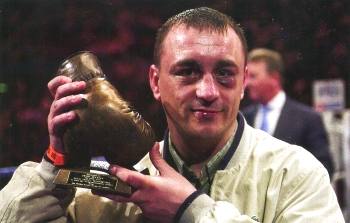 Perhaps no other fighter on earth knows the thrill of victory better than Peter Buckley. If you think about it, with his record, a win has to be so stunning an accomplishment at this point that it approaches the surreal.

Buckley is 39 years old, and tomorrow night in his hometown of Birmingham, England, a long, strange trip of a boxing career will end. He will face 27-year old Matin Mohammed, a fighter with one pro bout to date. That one pro bout was a draw, against Buckley, on October 5.

A draw in your first fight is not the worst thing. It happened to Buckley. Buckley then lost his second one. This was way back in 1989.

But it's been that kind of career for the man billed as "the world's worst boxer," who carries a career record of 31-256-12, with eight knockouts. His first loss came against a fighter by the name of Ronnie Stephenson, on October 10, 1989. That was six days after his first fight. Stephenson, a knockaround local club fighter, would wind up fighting Buckley four more times. The pair split the fights, 2-2-1. No one will confuse their rivalry with Robinson-LaMotta or Gatti-Ward, but hey.

The first thing to wonder about a fighter like Buckley, of course, is why do it? Why go through 20 years of constant losing, constant bruises and scrapes and beatings?

In a 2005 interview with Boxing Monthly, Buckley said, "I just love to fight."

Good enough answer for me.

There aren't many Peter Buckleys in boxing. In fact, like an opposite spectrum Ricky Hatton, there's really only one. In 256 losses, he's only been stopped 10 times. He has no disrespect for any opponents. He's a scrapper, and he doesn't pretend to be anything more.

Bad Left Hook sends our best to Mr. Buckley, and wishes him a happy, black eye-free retirement. Maybe he'll go out with a win. It'd be his first in half a decade. A pug like this deserves one more moment of elation.