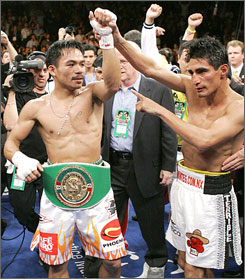 Future Hall of Famer Erik Morales is making it very clear that his retirement is soon to be over. Speaking with NotiMex, Morales said that he wants to fight lightweight world champion Juan Manuel Marquez in 2009.

He also took some pretty lame swipes at Manny Pacquiao, claiming that Pacquiao never wanted to fight him at 135 pounds, and that making 130 alone kept Morales from beating Pacquiao in the latter two fights of their thrilling trilogy. This is, of course, a pretty bunk claim. Pacquiao would have had absolutely no reason to fight at 135 pounds in those two fights; if Morales was having so much trouble making weight, he probably should've moved up and lived without the fights.

The last time we saw Morales in 2007, he was battered but gave back as much as he received, going a full 12, exciting rounds with David Diaz. It was a fine fight, but afterward, Bob Arum of Top Rank said that Morales reported a buzzing in his head from clean shots. After that, Arum washed his hands of any future career Morales might consider, and Top Rank is not promoting Morales anymore.

Morales says he's contacted Golden Boy Promotions about fighting Marquez. It's a terrible idea. Morales is a very old 32, with years of wars doing real damage to his body. He was among his generation's elite, and the trilogies with Pacquiao and mortal enemy Marco Antonio Barrera are unforgettable. He had a lot of great fights, winning and losing.

But this is a fighter that has lost his last four, and five of his last six. His victory over Pacquiao in March 2005 is his only win in six fights, and Pacquiao twice avenged that one, brutally so. He was shockingly outpointed by Zahir Raheem at 135 pounds after the Pacquiao win, so his idea that lightweight (where he's 0-2 lifetime) would have been any better for him is questionable at best.

There is absolutely money in the fight, but if Oscar de la Hoya and Richard Schaefer and the rest of the Golden Boy team are going to talk about making boxing better and finding the right matchups and doing things the right way, they better think long and hard about supporting a clearly past his prime Morales getting into the ring with one of the best fighters in the world. Marquez may respect Morales with every fiber of his being, but he's going to try to knock him out. That's how he fights nowadays. Marquez is out to prove that he deserves to have his name mentioned alongside countrymen Barrera and Morales, the guys that kept him in their shadow for years. Marquez would not ease up for one second against Morales.

It's not the same as fighting David Diaz, a guy that doesn't have much of a punch or too much of a skill set. He's a durable, likable, tough guy, yes, but he's not a great fighter. Marquez is a great fighter, still has his punch, and Morales is just plain past it. It's over.

I wish "El Terrible" would stay retired, but he probably won't. And considering the coin to be made off of a Marquez-Morales fight -- the only matchup with the two of them, Pacquiao and Barrera that never came off -- it wouldn't shock me to see that fight happen. All you could hope for is Erik not getting hurt.