Share All sharing options for: Fernando Guerrero: A young fighter worth watching 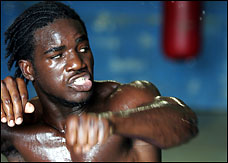 I don't generally get all that excited about young prospects in boxing.

I know the guys to watch, because other people tell me to watch them. I have young fighters I like -- Andre Berto was an ESPN.com Prospect of the Year, as was Amir Khan, and despite Khan's chinny nature, I still like both guys. Berto is panning out wonderfully thus far.

I try to support the American prospects, in particular, because I hope for a rebound in the sport's popularity in this country. Good, young fighters have a way of capturing, at the least, their home region's imagination.

Back in May, Ruslan Provodnikov (a good prospect) beat a young American named Brian Gordon. I came away both loving that six-round scrap, and really liking Gordon, who showed a ton of heart and resiliency against the more experienced, more skilled Provodnikov.

Tonight on ShoBox, we got to see another young American fighter, as Dominican-born Fernando Guerrero led off the show with a dominant eight-round shutout decision win over previously-unbeaten Tyrone Watson. The 5'9", 21-year old Guerrero is fighting at middleweight, which may be hard for him with his height in time, but there's no one saying he has to stay at this weight, either.

Now, Watson is an untested super middle that hadn't fought in 15 months and doesn't have much power. I'm not saying Guerrero proved anything with his win tonight.

What I am saying is that Guerrero is a kid worth rooting for. He stormed on the taller Watson all night, rendering him essentially useless almost every round. Watson spent far more time with his hands up, blocking his face, than he did letting his hands go and trying to fight back. There were rounds that could have and probably should have been 10-8 with no knockdown, because Guerrero so overwhelmed Watson that Watson did absolutely nothing but try his best to protect himself.

Guerrero further complicates his awkward southpaw-ness with constant movement, using his feet well, bouncing around without pause. And he is naturally aggressive -- though he has fought amateur, it wasn't for him. The pro game is for him. He has no problems breaking "bad amateur habits."

He's now 10-0 with nine knockouts. I'm not sure about his KO power, but he came straight down the pipe with his left hand all night against Watson, who as I said before spent most of his time blocking to minimize damage. Guerrero also mixed in a good-looking uppercut, and his ability to flat-out overwhelm offensively is good at this stage of his career. Obviously he'll run into a fighter that he won't be able to do this against, and then his mettle will be tested.

But you know what my favorite thing about Guerrero is right now? He had the Wicomico Civic Center in Salisbury, Maryland, rocking last night. There was a really good-sized crowd there considering that this was no big marquee event -- this crowd was probably bigger than that for last year's Marquez-Juarez Showtime main event, for instance, and we're talking about two well-known fighters there. Guerrero is bringing boxing back in his neck of the woods, and that's a good thing.

I'm not going to tell you that Fernando Guerrero is going to be a champion, though Watson's corner told him so after the fight. But he's a good-looking young fighter and someone I'm sure we're going to see more of on ShoBox and ESPN in the near future. He brings it, man. This is a kid worth the time to watch.