Phillips out of Williams running; Delvin Rodriguez in?

Share All sharing options for: Phillips out of Williams running; Delvin Rodriguez in? 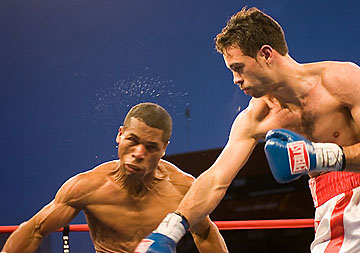 With junior middleweight titlist Verno Phillips out of the running to face welterweight titlist Paul Williams on November 29 (HBO) due to IBF complications, it appears that the new front-runner to face the WBA strap-holder is light 'em up guy Delvin Rodriguez, who has been an action star on ESPN2.

The 28-year old Rodriguez (23-2-1, 14 KO) hasn't fought since July, when he was the victor over Oscar Diaz in the fight that unfortunately put Diaz in a two-month coma. Though no one should forget the sad end result of the bout, Rodriguez looked good that night, and brought the action like he always does.

Rafael said the same thing, but I think what's actually sort of neat about this idea is that instead of a guy like Carlos Baldomir or some other moderate name with very little chance and zero future, at least Rodriguez entering the title picture is something new. I give him almost no shot at beating Williams, who has recaptured his hunger and ferocity, but he'll fight. He will not run from Williams.

Rodriguez, at 6'0", is also one of the few guys in the welterweight division who can almost look Paul in the eye.

It's no marquee matchup and there's a chance Williams overwhelms him very quickly. But there's also a chance we get some warring rounds out there, which is more than you can say for a lot of guys. And it would also mean that at least Delvin has the sack to fight Williams in the first place.