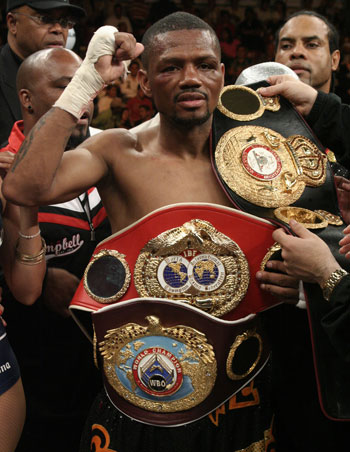 Married in May, with six children to support, a house he was due to close on and a $110,000 tax issue with the IRS, the money from the fight would have gone a long way toward helping Campbell take care of his responsibilities.

Not only was Campbell out his $300,000 purse, the bout needed to take place in order for him to collect the remaining half of a $200,000 signing bonus in his contract with promoter Don King. Part of the bankruptcy means that Campbell's contract with King was voided, Trekas said.

Trekas said they attempted to work out something with King to help Campbell get by, but they could not come to terms.

"Nate filed for bankruptcy and notified [Don King Productions] of his actions," Trekas said. "When that fight didn't happen, it hurt. Nate's had a tax issue he's been dealing with and this bankruptcy has been planned for over a year, but was put on hold hoping things could be worked out. But based on what happened with the Guzman fight and not getting the income, and other issues, his attorney and accountant advised him that he had to do it now.

"In the bankruptcy, Nate rejected the King contract. We'll just have to see what they want to do. Technically, Don can challenge it. It's not a winning strategy, but maybe there is something that can be worked out. That will be up to Don."

It's sad that this is where Nate's at right now, but this sort of thing does happen, and I'm confident with his skills he'll find his way back into a more comfortable situation.

From a boxing standpoint, the most compelling thing is the split with Don King, which I think can only be good for Nate's career. Nate Campbell has not fought since March, when he scored the biggest win of his career. With the Guzman fight scrapped (not Campbell's fault, not King's fault), a lot of the shine has worn off.

Nate's a hell of a fighter and a nice guy, and I'd love to see him sign with Top Rank or Golden Boy. For one thing he'd be making money, which would help, but they'd also be able to easier secure big fights for him with their own stables of fighters, or going across the board and setting up something with the other guys.

Here's hoping everything works out for Nate -- and it will. He's too good and too hard-working for it to not.