Share All sharing options for: Mondays with Boxers: October 6, 2008 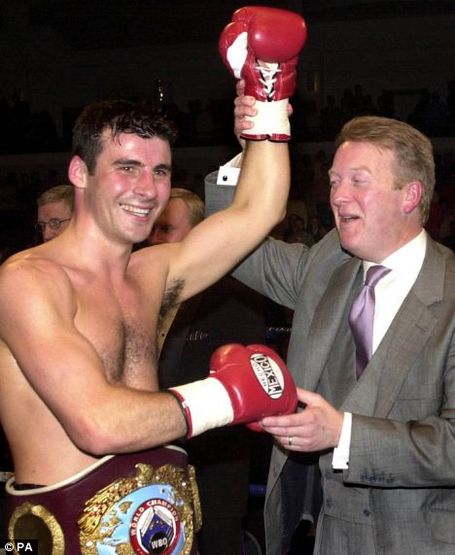 Oh, and Chad Dawson is getting awesome.

"He would regularly pull out of fights at short notice for reasons he felt were valid. But it left me to sort out the mess with opponents furious and TV execs pulling their hair out." -- Frank Warren, opening up a supreme can of whoopass on Joe Calzaghe (BoxingScene.com)

"At one stage it got so farcical I had to pay opponents cash up front before they would sign a contract beecause they were afraid of going through weeks of training camps for nothing when he pulled out." -- Warren

"He insisted a couple of weeks beforehand he was injured and couldn't fight. Both his dad, Enzo, and I had to persuade him to go step through the ropes, something I've never done with a boxer before or since. Had he been left to his own devices, it may never have happened." -- Warren on Calzaghe's fight with Jeff Lacy

"I gave up trying to get him the kind of gigs Ricky Hatton would do at the drop of a hat. Joe made his comments about the money and attention Hatton got but although Joe is the better boxer, Ricky was prepared to put in the hard yards to get publicity." -- Warren

"In the 2008 latest edition of his autobiography, Joe states that (Roy) Jones is 'washed up' and in an interview in Boxing Monthly he said he had 'no interest' in fighting Jones, who he describes as 'not a great fighter anymore,' observing that 'Roy's resistance is gone.' Now Calzaghe is trying to make out the Jones fight will provide some kind of legitimate challenge." -- Warren

AN EMERGING STAR IN THE SPORT OF TALKING S***

"Drill, baby, drill! That's what I'm going to do to Anphonyo Tarver when I finally get that 14-carat chump in the ring." -- Chad Dawson (BoxingScene.com)

"At least I won't have to go offshore to get my hands on him. Tarver's going to need a financial bailout to pay for a new set of teeth." -- Dawson

"I just hope his dentist gets the cash up front because 'Old Chapter 7' isn't the most reliable when it comes to paying off his debts." -- Dawson

"Getting rid of Tarver is not just my mission, it's a public service." -- Dawson (woof)

"My wife certainly doesn't like it." -- Oscar de la Hoya, joking about his many female fans (San Francisco Chronicle)

"(Pacquiao) is a huge challenge for me at this stage of my career. I can makea  strong argument and say, 'What the hell am I going to win here? He has everything to win; I have everything to lose.' So it's those types of challenges that keep me going." -- Oscar

"It's probably one of the biggest fights you can make in the division with two top-10 contenders." -- promoter Dan Goossen, trying to finalize a December fight between Jamess Toney and Tony Thompson (ESPN)

"If I can't get through Monte, I'm not going to be able to beat Wladimir Klitschko, so I'll probably call it a day. If I stumble at the first hurdle I'll look a joke. So what's the point?" -- David Haye on his upcoming heavyweight fight against Monte Barrett (WalesOnline)

"My plans have not changed. I expect to return to the ring in search of the lightweight world title." -- the not-so-retired Erik Morales, who earlier in the same column condemns the idea of an Israel Vazquez-Jorge Arce fight for fear of Arce getting hurt (BoxingScene.com)