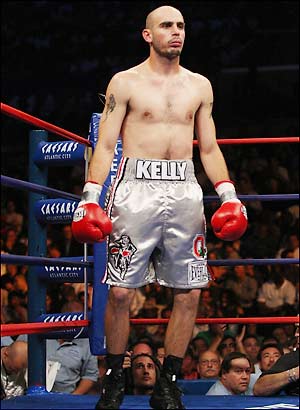 According to Joe Maxse of The Cleveland Plain-Dealer, middleweight world champion Kelly Pavlik suffered a bruise on his left elbow about ten days ago while sparring, but trainer Jack Loew says the October 18 pay-per-view bout at a 170-pound catchweight with Bernard Hopkins is still on, and that will not change.

Pavlik is wearing a synthetic sleeve while working out, and did take a few days off of sparring.

Pavlik referred to the injury as "bothersome," while Loew simply stated, "there's nothing you can do" about it.

The gym in Youngstown where Pavlik has trained his entire career is closed to the public as camp winds down. The closer this fight gets, the more genuinely excited I am to see it. Not because I think it'll be a great fight, but because a Pavlik win means a lot to American boxing, and as much as I may dump on watching Hopkins as far as the lack of action goes, when he's at his best it can be a pleasure to watch him ply his trade. I'm wondering how he'll combat the younger, faster, stronger man, and I'm interested to see how Pavlik attacks a fighter as brilliant as Hopkins.

So it's good to know that this won't be another cancelled or delayed affair. There's an injury, it's not severe, it should be healed up in full by fight night, and the show goes on.