Share All sharing options for: Top Rank, Golden Boy hard at work on Margarito-Mosley for January 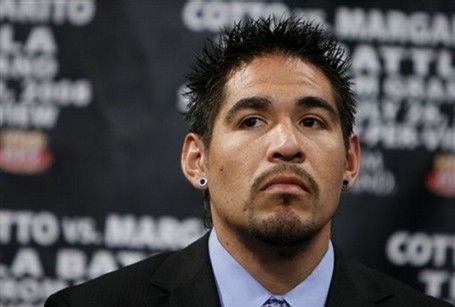 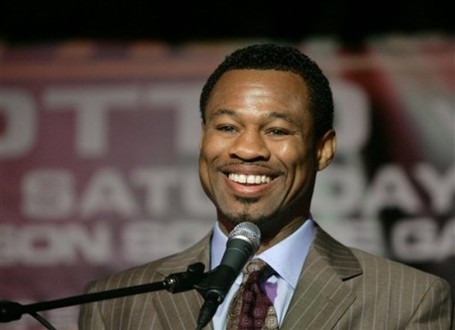 Margarito (37-5, 27 KO) has been off since upsetting Miguel Cotto in July to win the WBA welterweight title and put himself atop most welterweight rankings, springing into most pound-for-pound top tens in the process. Mosley just recently fought and defeated Ricardo Mayorga at 154 pounds, though I think it's safe to say that it was not his best performance, despite the sensational, one second remaining, knockout finish.

After that fight, unaffiliated promoter Lou DiBella said, "If they let Shane Mosley fight Antonio Margarito they should be arrested. ... Margarito would put Shane in a pine box."

The 37-year old Mosley (45-5, 38 KO), though, is a far more marketable name than Joshua Clottey, the IBF welterweight titlist, who had also been rumored as Margarito's next opponent. Margarito beat Clottey in December 2006 in a rugged fight.

I think we're looking at more than just the name, though. Mosley also -- at this moment, based on the Mayorga fight -- looks like a far easier mark for Margarito, who could win this big fight and have even greater momentum heading into a likely summer 2009 rematch with Cotto. Listen, I love Shane Mosley. He's a first ballot Hall of Famer. But Mosley should have rolled over Mayorga, who ballooned up in weight after the weigh-in and was his usual, sloppy self. He had 10 pounds on Shane in the ring, yes, but they weren't a good ten pounds.

There were rounds of that fight where Mosley looked lost and did absolutely nothing, and they were rounds Mayorga won by default, really. Mayorga never dented Shane -- he barely even landed punches on him. Swung his arms around, yeah, but didn't land clean punches. And it's true that Mosley is a better 147-pound fighter than 154-pounder (much better, in fact), but Margarito is a big, big welterweight. He's strong, he's incredibly durable, and his workrate is very high.

Does Shane have the reflexes left to deal with a guy like that? As slick and sweet of a practicioner of the science as Shane Mosley can be, he loves to fight. He really does. His natural instinct is to throw back on a guy who tries to turn it into a brawl. At early points, we saw that against Mayorga. Margarito is a straighter, better puncher than Mayorga, and a bigger man that keeps himself in shape, to boot. But he works tirelessly -- Mosley will try to combat that with his own workrate, probably. He could go in with the gameplan to counter punch and make Margarito chase, but we saw what happened to Miguel Cotto with that idea.

And I know it might seem like I'm down on this idea. I'm really not. It'd be a great payday for Margarito, another good one for Shane, and I'd absolutely tune in, be it on regular old HBO (please? as a gift? to the boxing diehards?) or on pay-per-view (the likely destination). I think what's coming out of my fingers as I type this all up is just regret that I think I'd see Shane Mosley get whomped on and beaten down by Margarito. Sugar Shane is one of my favorite fighters, one of the guys that invigorated my adult interest in the sport.

I own two fight posters, because as much as I like them, I'm (1) poor and (2) have nowhere to put them in my apartment, really. One is Barrera-Morales I; the other is Oscar-Shane I. I'm a huge fan of Shane Mosley.

But I like Margarito, too. And he's got a lot more to do with the future of the sport than Shane does. Margarito's at his peak; Shane's past his. Margarito's too big, too physical, too strong, and too tough.

Let's see it, anyway. There's not a better fight to be made unless Margarito-Cotto II could be made on the date (it won't be) or one of them could get a crack at Money Mayweather (they can't).