Share All sharing options for: Holyfield nearing deal to fight Valuev on December 20 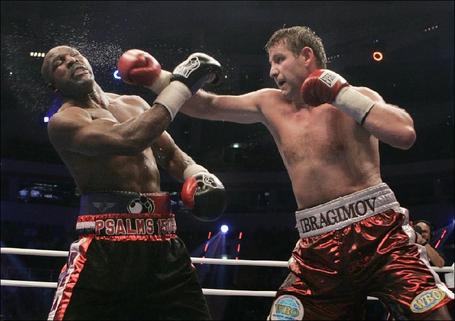 This is not a joke. Well, at least not in the sense that I'm making it up or that there aren't genuine reports of this happening. As for the fight, yes, that's a joke.

Dan Rafael has the report:

Holyfield (42-9-2, 27 KOs) said his attorney is reviewing a contract from Valuev promoter Sauerland Event for a fight that would take place Dec. 20 in either Germany or Switzerland.

"It's solid. They asked if I will take the fight for the offer they made and if everything is straight up, I will take that fight," Holyfield said. "My lawyer is looking at it."

Evander Holyfield is 45 years old. He can go on and on all he wants with that "age ain't nothin' but a number!" BS, and recall George Foreman and compare himself to other old fighters all he wants. But Holyfield has not won a decent fight in six years, and whenever he fights anyone worth their salt, he loses. Even his 2006 decision win against Fres Oquendo was highly debatable.

Holyfield was last seen getting slapped around by Sultan Ibragimov. Ibragimov, at 6'2", is a full ten inches shorter than Valuev, who will tower over Holyfield. Evander had trouble getting inside against Ibragimov. What the hell does he think he's going to do with Valuev? He might as well fight Wladimir Klitschko.

Rafael says the purse is under $750,000, putting one-and-one together when Holyfield would not disclose the amount but would say it's the lowest he'll have ever received for a championship fight.

It's kind of sad, and I don't have first-hand knowledge or anything, but Evander's probably hurting for the money. We all got to hear about his bad financial situation this past summer. Boxing is what he does. It's how he makes money.

There are only two things I can say about this fight, really. First, I hope Evander doesn't get hurt. Second, anyone that buys this sham of a fight on pay-per-view deserves the turd sandwich they'll be served.