Share All sharing options for: Oscar joined by Angelo Dundee for Pacquiao fight 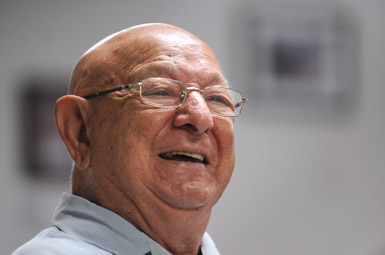 Dundee, who most famously was corner man for Ali and Leonard, will aid Oscar and head trainer Nacho Beristain in their attempt to combat Pacquiao's speed. Dundee, essentially, will serve as an extra set of eyes, and let Oscar and Nacho know what he's thinking.

It can never hurt to have someone as important and intelligent as Angelo Dundee in your corner. Angelo is still sharp as a tack, too; this is no stereotypical 87-year old man. He's still got the mind for the game, and was one of those that called Hopkins over Pavlik before that fight happened.

It might not be the biggest deal in the world, but it's very, very cool if you take a moment to consider it. Here is Mr. Dundee, at 87, working with, as he puts it, the most important fighter of this era. He has spanned so many eras of this sport, and worked with so many world champions. For him to come back to the sport now, even in a smaller role, is just a gift.