Versus grabs another card: Toney-Thompson on December 13

Share All sharing options for: Versus grabs another card: Toney-Thompson on December 13 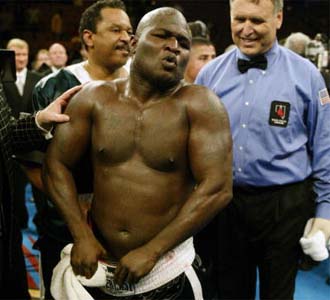 The Versus Network has added another live show to its December schedule, as the cable network will air a do-or-die heavyweight battle between James Toney and Tony Thompson on December 13, live from Cabazon, California.

1. Yes, that means Versus has three live cards in December, with Winky Wright-Michi Munoz on 12/4, and Steve Cunningham-Tomasz Adamek on 12/11, plus the debut of "The Contender" season four on 12/4. It's great to see the network, which is frankly fairly strapped for programming, throwing their hat in for real with boxing after that gloriously awful Top Rank exclusive contract we all had to suffer through.

2. Yes, that means there are THREE live fights on December 13 in the States. Wladimir Klitschko-TBA (likely Hasim Rahman) on HBO, Toney-Thompson on Vs., and Kendall Holt-Ricardo Torres III on Showtime. If Holt-Torres and Toney-Thompson are on at the same time, well, you know what I'm going to pick, but for those that don't subscribe to Showtime, it's not the worst fight in the world to pick up.

I won't lie and say it's a fight that excites me. Tony Thompson is a nice guy, but James Toney is someone I'd rather the sport be done with. Dan Goossen has done a masterful promotional job keeping Toney's name in the pot after his various screw-ups, plus just the fact that he's 40 and hasn't won a significant fight in five years.

The last time I saw Toney in the ring doesn't help matters, either, since it was that sham of a rematch with Rahman that probably convinced every slightly curious passer-by that boxing is garbage.

But it's nice to see Versus continuing to work hard to get boxing on their network, and that's the real story here. The more boxing on TV, the better, even if it's clown James Toney.