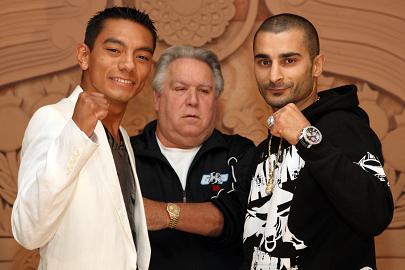 I tried to work an honest to God preview for tonight's junior bantamweight unification fight between WBC/WBA titlist Cristian Mijares and IBF titlist Vic Darchinyan, but I failed to come up with anything very provocative or interesting to say.

The simple fact of the matter is this: these are fighters that don't get enough due among American fans. This is a country that still ignores guys this small, no matter how good they are or how good their fights are. Mijares is having as good a year as anybody in the sport, and Darchinyan always comes to fight. If the size of the dog in the fight still matters to you as a boxing fan, then I guess I could see why you might think boxing is in the dumps.

It's a classic boxer versus brawler matchup. No matter how much Darchinyan says he's not going to fight stupid, he will. He's a fight stupid kind of guy, and that's no knock. That's just who he is. He's one of the angriest fighters I've ever seen; he seems to hiss with every movement. Mijares is a classy boxer, a guy that works on speed, defense, and what he calls "a gift" of seeing punches coming. He brutally battered Jorge Arce last year in what was his coming out party, and he's done nothing but win since, including a victory over Alexander Munoz earlier this year.

Should he beat Darchinyan, as most feel he will, he's a very serious candidate for Fighter of the Year.

Darchinyan is looking for some amount of redemption still after his shocking 2007 knockout loss to Nonito Donaire. I think there's really nothing Vic wants more than to get another crack at Donaire, particularly since the rumblings are that Nonito is due to head up to 115 pounds. If he beats Mijares, he's got three title belts to offer.

I've never liked Darchinyan, but I do admire him. That blob in the photo above had no desire to match Darchinyan with Mijares, knowing it's a terrible style matchup, and saying as much. But Darchinyan wanted this fight. There's a lot to be said for a fighter with that kind of heart.

It's going to be a good fight. A few final notes:

1. Kevin Iole's preview is a good one, and it paints Mijares as one of the most humble guys ever:

"I know there are a lot of Mexican fans who don’t like my style, who just love blood and knockdowns and brawls and that kind of a fight," said Mijares. "There are some who love speed and my style of fight, too, though. I’m not perfect and I know that. I’m not afraid to be hit. But I don’t like to get hit. Honestly, who does? No one really does. They may tell you that, but they’re just talking. No one wants to be hit, if they could help it. I have a gift to see the punches coming and have a way to avoid them and that’s what I do."

"I’m not saying I’m Finito Lopez, because I know I am not. But I want to fight every big fight I can fight so the people can appreciate the fighters in these weight classes and know what I am able to do in there. Vic is a terrific fighter and is no walkover. Beating him in a fight on Showtime in Los Angeles, that’s going to be a big win for me."

2. Our pal Tim Starks at The Queensbury Rules has a damn good preview, too, and he's going with Mijares.

3. A nice Darchinyan article at The Age, including this quote from Shaw: "If I told Vic he had to fight Mike Tyson, Vic would show up for the fight."

4. LA Times quote from Darchinyan: "You know, it's boxing. There's two guys in the ring, and if you don't punch him, he'll punch you, and the same thing that happened [to Burgos] can happen to you. At the end of the day, I'm concerned with my opponent, and I want him to be able to go home to his family, not to the hospital. But in the ring, I want to destroy him."

These guys are pretty much total opposites. We'll be here live at 9pm ET for round-by-round coverage and scoring. We hope you'll join us for the fights (Andre Dirrell-Victor Oganov will open the night).

As for a pick, I know I shouldn't go against Mijares because he's a better fighter, but I like Vic to catch him and hurt him in this one. Give me the Darchinyan upset by knockout, late rounds. I realize this is a stupid pick.