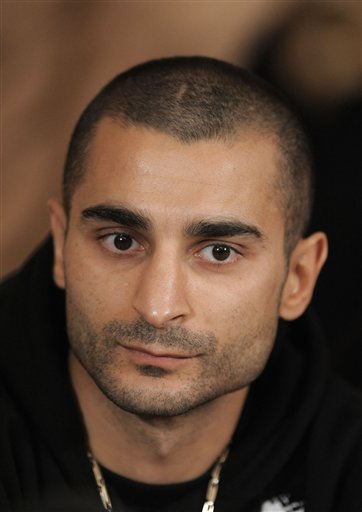 "All the writers -- did I keep my promise?" -- Vic Darchinyan after the fight, referencing his promise to knock Mijares out

Listen, Vic, you don't have to tell me:

As for a pick, I know I shouldn't go against Mijares because he's a better fighter, but I like Vic to catch him and hurt him in this one. Give me the Darchinyan upset by knockout, late rounds. I realize this is a stupid pick.

Lemme tell ya somethin', Mean Gene! This may have been the single best performance of Vic Darchinyan's career. Beating a top 10ish pound-for-pound fighter, and beating him convincingly, is absolutely his biggest win. This was the best fighter he'd ever fought, and Darchinyan laid waste to Cristian Mijares.

Darchinyan (31-1-1, 25 KO) is now the WBC/WBA/IBF junior bantamweight titlist after a stunningly dominant win over the favored Mijares. Showtime's Steve Albert noted that 26 of 32 boxing writers at their press thingamajig picked Mijares; almost everyone I read was picking Mijares past Darchinyan's crazy fans.

But even though I picked Darchinyan, I saw it more that he'd eventually find Mijares and hurt him. I expected Vic to struggled with Mijares speed and defensive acumen. He didn't.

In fact, it was "Defense" Darchinyan that was the start of the fight. Yeah, he landed the bombs. He knocked Mijares down with an uppercut in the opening round, and knocked him out with a final barrage in the ninth round, but the fact is he totally neutered Mijares in the ring. Mijares may have just had a bad night at the office. He may have underestimated Darchinyan and taken him lightly.

Whatever it was, he got his ass kicked.

The only title fight left to be made in order to crown a true champion at 115 pounds is now Vic Darchinyan versus Fernando Montiel, and given that Darchinyan took Mijares against everyone's advice, I have no doubt he'd fight Montiel. And we know Showtime will snatch that one up; they've firmly been in Darchinyan's corner for years now, and he's given them all the reason in the world to stay there.

Mijares (36-4-2, 14 KO) suffers his first defeat since 2002, and really, it's essentially the first real defeat of his pro career. His first three losses all came within his first fifteen pro fights, when he went 11-3-1. Outside of a 2006 draw with Luis Maldonado, he'd been perfect since. Many great fighters have lost early in the Mexican rings (Margarito, Soto, etc.)

I said the last time I updated the P4P list that I thought some people were going a little too crazy about Mijares. I don't feel like this is a fight that "vindicates" that thought or anything; this was not the best Mijares, as I said. I think the real story of this fight was, again, that Vic Darchinyan was better than we thought he could be. He was better than he'd ever been before.

On the undercard, Andre Dirrell overwhelmed Victor Oganov as expected. Oganov landed perhaps one good punch before referee Ray Corona stopped the fight in the sixth round, seemingly a bit out of nowhere. There were plenty of moments, with Dirrell throwing all but the kitchen sink and Oganov doing nothing, that Corona could have stopped the fight. The moment he chose was a bit peculiar, and while I think it was questionable in practice, it was the right call in spirit. Oganov had no chance to win that fight.

On the undercard, Sergei Dzinziruk outpointed 154-pound challenger Joel Julio. I haven't seen the scores, but one report I read said that Julio had Dzinziruk on the ropes early and slowed down late to lose the fight. Dzinziruk stays unbeaten (36-0, 22), while Julio loses his second career fight (34-2, 31).

Top Rank's pay-per-view is over, and here are the notable results.

Vanes Martirosyan (22-0, 14 KO) knocked out Charles Howe in the opening round.