Share All sharing options for: Mondays with Boxers: November 10, 2008

It's a retiring kind of week in the world of boxing, even though it looks like at least one of the subjects won't be giving up the ghost. 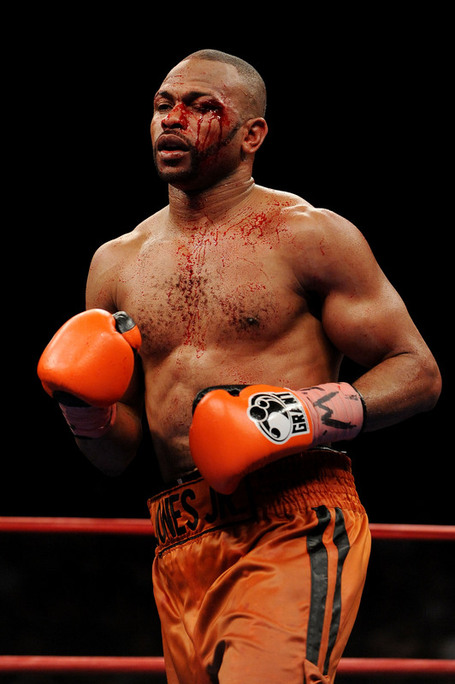 WELL IT'S ALRIGHT, RIDING AROUND IN THE BREEZE

"I think he caught me with a right hook that cut my eye. I was like, 'Whoa.' I've never been cut before. But I'm game, I'm going to fight 'til the end always. I gave my best effort, but that guy was the better man tonight." -- Jones

"Those pitty pat punches he throws were a little harder than I thought. I couldn't see out of my left eye." -- Jones

"I don't know what's next for me. I worked so hard for this fight. I just don't know. I couldn't figure him out." -- Jones

"Roy really should have been in his face after that but it’s not really the same Roy Jones anymore. I think he should stop now as Joe was playing with him towards the end. You don’t want to remember him like that, he deserves more." -- past Calzaghe victim Mikkel Kessler, who was ringside (WalesOnline)

"Joe has beaten everyone there is to beat and has nothing else to prove, so I think he should retire." -- former heavyweight champ Lennox Lewis (ESPN)

"He should retire -- there's nothing more Joe Calzaghe can do. There's always a new contender coming through. They're going on about Joe should fight Chad Dawson, I think that's a load of rubbish. Joe has beaten Bernard Hopkins, he's beaten Roy Jones - you can't get a better way to bow out, really." -- Ricky Hatton on Radio Five Live (Independent.co.uk)

"I think he will still continue,. He still has the hunger and he has fought one of the best guys in the world and knocked him down. Is he the fighter that he was 10 years ago? No, but he is still better than a lot of guys." -- McGee Wright, Jones' manager (Yahoo!)

"Yeah, this is it for me. I have a great family and a future as a commentator. I'm thirty-seven and I've been to the Olympics and I've won a world championship. After my fight with Jermain Taylor I retired for a while, but I decided I wanted to try for a middleweight title. I got my chance, there's no need to continue. Why keep going?" -- Raul Marquez, retiring after being beaten by middleweight titlist Arthur Abraham (The Sweet Science)

"I was doing well but I hit him with my best shots and it was like a brick wall. He's surprisingly strong. Very strong. I believe the shots I landed would have hurt most fighters. I tried my best but it wasn't enough, and after a while I knew it." -- Marquez

"I wanted to really get started as normal after round six. But he quit so I'm disappointed I couldn't get a knockout for my audience. What a pity he wasn't strong enough for me. He hit me with some good body shots that I felt, but I'm in good shape so it never bothered me." -- Arthur Abraham, still unbeaten

"One thing I've found is that in being a champion, having all the belts in the world, you know -- I've got eleven belts. But at the end of the month, when it's time to pay your mortgage, them belts don't do nothing for you. The mortgage company don't wanna hear about the fact that I got belts. They want their money, you know what I mean?" -- Zab Judah, who fought and won on Saturday against woefully overmatched Ernest Johnson (BoxingScene.com)

"I think it's great that I can take my career into my own hands." -- Judah

"What people need to be told is that they can come to the show at the Whitlam Centre on Wednesday night knowing there will be no grog for sale. The Anthony Mundine fight is going to be the first professional sporting event in New South Wales to be grog-free." -- Khoder Nasser, manager of Anthony Mundine, on banning alcohol from Mundine's next fight. The ban comes on the heels of a post-fight brawl in Australia after Ahmed Elomar upset prospect Willie Kickett. (Sydney Morning-Herald) (Video of the brawl)