The Story of Joe and Jeff: Two careers shaped in one fight

Share All sharing options for: The Story of Joe and Jeff: Two careers shaped in one fight

On the heels of Joe Calzaghe's one-sided win over Roy Jones, Jr., will come the return to the ring and spotlight of arguably Calzaghe's most talked-about opponent, Tampa's Jeff Lacy.

Hopkins and Jones were bigger names; time has taught us that Mikkel Kessler was a tougher test and a better fighter; and Calzaghe probably has a good handful of wins that, with hindsight available, were better than the victory over Lacy.

But the Calzaghe-Lacy fight on March 4, 2006, at the M.E.N. Arena in Manchester, was one for the record books in many respects, and it is the fight that delivered Joe Calzaghe without any questions to the world stage, and the fight that has haunted the career of Lacy ever since.

Calzaghe, at 40-0 and having held the WBO super middleweight title for nearly nine years, was a massive underdog on both sides of the pond. In the States, Calzaghe was seen as just another European fighter who would wilt against the powerful attack of Lacy, the muscular, Tyson-like American star who came in with a 21-0 record, featuring 17 wins by way of knockout.

It truly cannot be appreciated how favored Jeff Lacy was to beat Joe Calzaghe right now, I don't think. So far removed from the fight, it seems ludicrous that 12 of 13, 11 of 13, or 19 of 27 knowledgable boxing fans would pick Jeff Lacy over Calzaghe. But they did.

Most expected Lacy to be emphatic in his victory, too. Alex Stone of The Sweet Science described Lacy as a fighter who "hits as hard as Tyson and is as fast as 'Pretty Boy' Floyd." Today, both claims seem laughable. At the time, they weren't as crazy as that sounds. 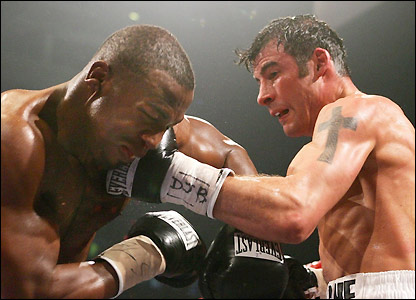 What was clear early in that fateful fight was that pretty much to a man (or a woman, if you are one), everyone had underestimated Joe Calzaghe, who had Lacy frustrated and overwhelmed before American fans, in particular, could even fully formulate the thought that perhaps this Lacy wasn't all he was cracked up to be.

Most memorable, without question, was Calzaghe returning to his corner at one point and telling his father-trainer, Enzo, "He can't hit for shit!" This after Calzaghe had taken some good shots from Lacy, who was supposed to be one of the best punchers on the planet.

Here was Calzaghe, the man whose career was the one in question, battering the image-driven Lacy, whose cut-from-marble physique made him instantly attractive. It was the athletic, somewhat stringy Calzaghe, with his pit-pat punches landing endlessly, that embarrassed and dominated Jeff Lacy, bloodying him and sending him back to America with his tail between his legs. The damage was done.

According to CompuBox, Calzaghe connected on 351 of 952 punches, for a 37% rate. Compare that to Lacy, at 116 of 444, for 26%. Lacy was dizzied and befuddled at almost every moment of the bout; he looked like he had no business in the same ring as Joe Calzaghe. Even Lacy's trainer, Dan Birmingham, could do nothing but applaud Calzaghe. "Calzaghe put on a clinic," he said. "He showed he is a master of distance and timing."

After that win, Calzaghe took on Sakio Bika, who would gain fame later as the winner of season three of "The Contender." After their bout, Calzaghe called Bika a "horrible, dirty fighter." He also expressed disappointment at being matched with "Contender" season one star Peter Manfredo, Jr., after Bika, and said he wanted to get back to fighting the big fights.

He did that in November of 2007 when he took on Mikkel Kessler, the Dane who was the only other man on the planet that could make any reasonable claim to being the best super middleweight in the world. Calzaghe outpointed Kessler with another remarkable performance, and even detractors had to then concede that Calzaghe was a great fighter, and quite probably the best super middleweight of all-time.

But what of the loser, Jeff Lacy? The former U.S. Olympian saw a highly-promising career all but vanish that night in Manchester. So thorough was the beating he took that nothing could be salvaged from the fight as a positive. Lacy was humiliated by Calzaghe on the world stage. It was the biggest fight of either man's career, and one of them made the absolute most of it. The other was simply shut out and shut up. 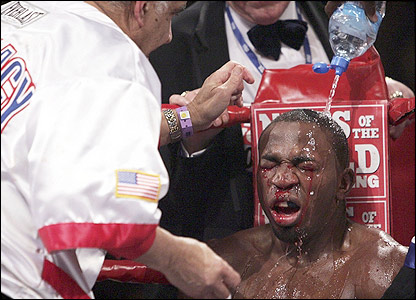 Since the loss, Lacy has fought only three times, and you wouldn't go so far as to call any of them "big" fights. He took on Vitali Tsypko on a Winky Wright undercard in December 2006, tearing his labrum in the process. He won a majority decision (96-94, 96-94, 95-95) and failed to impress or begin to wipe away the memories of the Calzaghe fight. Personally, I thought Tsypko did enough to win.

After a year off, Lacy was given the main undercard spot on the Mayweather-Hatton pay-per-view, facing fellow past Calzaghe victim Manfredo. With a chance to further remove himself from his one loss, Lacy was again slow, robotic, and unimpressive; he beat Manfredo 95-94, 96-93, and 97-92. Personally, again, I thought Manfredo did enough to win the fight. In both instances, I should note, I felt the fights were very close.

In being such close affairs, the ghosts of the Calzaghe fight continued to haunt Lacy. The wins only further served as questions of Lacy's true ability. Not only did Calzaghe make it clear that he wasn't all that his hype said he was, but now the likes of Tsypko and Manfredo were making us wonder if he was even a top 10-level fighter to begin with. Turns out he wasn't great; how good is he?

Lacy fought again earlier this year, main eventing on ESPN2 against rugged veteran Epifanio Mendoza. The rough, exciting brawl was won by Lacy via majority decision (96-94, 97-93, 95-95), and helped to position "Left Hook" for another shot at a major fight. Old Olympic teammate Jermain Taylor, coming off of two losses to Kelly Pavlik, was looking to move up to super middleweight. He needed an opponent, and Lacy's name kept coming up.

They signed the deal, though Lacy tried to talk about retiring after being insulted by the money offer. This Saturday night on the campus of Vanderbilt University in Memphis, Tennessee, Taylor and Lacy, two fighters that desperately need this win, will lock horns.

While Joe Calzaghe tours the States defeating legends and giving his sealed Hall of Fame case a few more embellishments, Jeff Lacy is simply looking to survive as a professional fighter. His 24-1 record is misleading; it might as well be 24-5 at this point. For Lacy, it has been an uphill climb to regain respect since the Calzaghe loss, and his performances haven't had him scaling the mountain at much of a clip.

If Jeff Lacy loses to Jermain Taylor, as most feel he will, his place in boxing is very unclear. Where does he go then? Does he have it in him to accept a role as Professional Opponent, hoping to turn that into a spoiler casting? It has worked for many fighters over the years, but Lacy has never given the impression that he has that sort of dedication to boxing. He wanted big money for this Taylor fight despite the fact that nobody has really carried about him in two and a half years. He sees himself as a star, perhaps because he was told for so long that he was The Next Big Thing in American boxing.

Should Lacy be unsuccessful this Saturday, he just won't have many options, barring it being some sort of Fight of the Year candidate performance. And right now, he can look at himself backed against the wall and trace it all back to that night in Manchester, when he was demoralized by a better fighter.