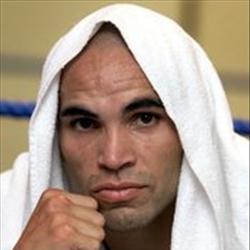 Former WBA super middleweight titleholder and occasional political rapper Anthony Mundine has expressed his desire to fight WBA middleweight titlist Felix Sturm, who recently again retained by beating Sebastian Sylvester, and has also spoken with Oscar de la Hoya about fighting in the States, according to the Sydney Morning Herald.

I've bagged on Mundine plenty in the past, and I don't feel bad about it. He's a fighter that talks a big game; always has been. He's an outspoken, sometimes controversial individual, and he asks for people to judge just about everything he says.

I've criticized his "reign" as a titleholder, and that deserved it, too, even though I don't really blame him for it. He won the "vacant" title in 2007 when the WBA promoted Mikkel Kessler to "super champion." Mundine had lost to Kessler convincingly in 2005, and beat Sam Soliman for the second time to "win" the "vacant" title two years later.

What else has been notable in Mundine's career, really? He lost to the much maligned Sven Ottke, then IBF titleholder, in 2001, via tenth round knockout, in a fight that obviously Mundine was just not ready for, which he readily admits today. He beat Antwun Echols in 2003 for the WBA title, then defended it against Yoshinori Nishizawa, one of the worst major title challengers of the decade. Nishizawa had a 24-13-5 record against crap competition going into the fight.

The Kessler fight was a big one. His huge fight with Danny Green broke all kinds of Australian records, and attempts to make a rematch have been fruitless, and they also seem rather unnecessary. Mundine beat Green cleanly, but Mundine has also a guy that has shown a love of fighting the familiar. He twice beat Sean Sullivan, even though their first bout was about as wide a decision as a man could ask for (120-109, 119-108, 116-112), and with another win earlier this year in a beyond pointless re-rematch, he's beaten Soliman a full three times.

Now, Mundine is focused on moving down to middleweight and becoming "world champion." Note that he is not mentioning, for now, a play for a fight against Kelly Pavlik or Arthur Abraham, universally accepted as the two best middleweights in the world, or at least universally accepted beyond the Sturm household. I'll grant that part of this could simply be that he thinks getting Sturm would be the easiest road in, and that having a title belt would be a nice negotiation key.

But if you really buy that line of thinking, I think you're giving Mundine too much credit. He has proven that having a belt doesn't mean he's going to fight better competition. If he did manage to get a fight with Sturm and beat him -- no stretch, because Mundine can fight -- I don't think we'll find him any more anxious to leave a comfort zone than Sturm has been.

The talking with Oscar thing sounds sort of bunk to me, as Mundine comes off kind of like Janice Soprano when she was attempting to get a record deal. Ah, yes, Tommy Mottola's about to sign you any day now, Janice...

You know, I hope Mundine does make a real go at getting big fights. The middleweight division could use more good fighters, and no matter what I say, I'll always say that I think Mundine can fight. Hey, I hope he gets the fight with Sturm. I hope if he wins he proves more willing to leave his bubble than Sturm has. His record of being willing to prove it is somewhat questionable, and that's my point. Thus far, despite some accolades, he is tagged with the "regional big shot" title. He can break out of that, but he has to be the one that presses to do it.