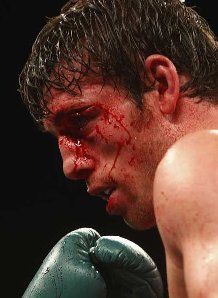 Bad Left Hook has learned in the last hour that the scheduled John Duddy-main evented "Grande Event" show in New York City, scheduled for November 21, has been cancelled. According to the press release we received, Irish Ropes, Duddy's promoter, "cannot deliver the services" of their fighter.

Duddy (25-0, 17 KO) was set to take on journeyman Sam Hill (17-9-1, 10 KO) in what was to be a tune-up bout for a much-discussed January date on HBO's Boxing After Dark against Ronald Hearns. The Duddy-Hearns bout may still be on; in fact, it's worth considering whether or not they kept Duddy out of this fight to preserve that date, as Duddy's cut history is pretty gruesome.

After fighting five times in 2007, Duddy has gone just twice this year. In February, under Klitschko-Ibragimov, Duddy won a close and mildly controversial battle against Walid Smichet. In late June, he beat Charles Howe in Boston via ten round unanimous decision.

For Duddy's fan following, they'll simply be waiting until January, most likely, for their boy to get back in the ring. Duddy-Hearns is a pretty interesting fight at 154 pounds, and is what the B.A.D. series is about. Duddy never has a bad fight and Hearns does his best to keep action going, so it could turn into a real war. I'm hoping we'll hear something definitive about that one now that there's no risk of another bad cut postponing it.