Bernard Fernandez on Holyfield: "Sadly, it has come to this"

Share All sharing options for: Bernard Fernandez on Holyfield: "Sadly, it has come to this" 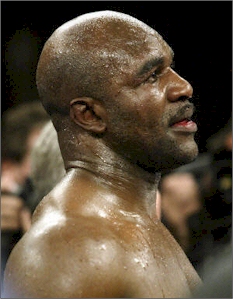 It's really nothing new to slam the continuing career of Evander Holyfield, but Bernard Fernandez of The Sweet Science posted a superb article today about Holyfield, his financial woes, his personal motives that have brought those woes, and his upcoming, borderline upsetting fight with Nikolai Valuev.

But the pages of the calendar inexorably turn and Holyfield will discover that there are no more fights to be fought, no more multimillion-dollar paychecks to be cashed. All that will be left are humiliation, foreclosure and perhaps even incarceration for failure to pay debts that at some point will pile higher than the top of Valuev’s head.

And he will have no one to blame but himself for the mess. At least Mike Tyson, who also went through hundreds of millions of dollars until he was worse than broke, could claim he had been systematically bilked out of chunks of his fortune by promoter Don King, co-managers John Horne and Rory Holloway, and a platoon of leeching hangers-on.

It's not a story of the rise and fall of Evander Holyfield; it's just a story of the fall, and how the fall is seemingly nowhere near its end. While Holyfield fights on, nothing really changes.

The fight, scheduled for December 20 in Switzerland, is genuinely what I would call the most humiliating of Holyfield's career, even before it has happened. Valuev is a freakshow attraction, and now, so is Holyfield. It never should have come to this for Evander Holyfield, who once truly was "The Real Deal."