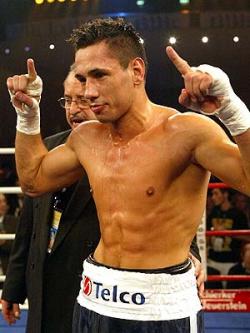 In a Universum press release, WBA middleweight titlist Felix Sturm has seriously dissed IBF titleholder Arthur Abraham, saying that Abraham is "clearly inferior" to Sturm and that "the best boxers in the world always want to box against me and not him."

He also mentions his fight against Oscar de la Hoya, which most analysts and fans had him winning despite Oscar's official victory (I'm one of them, again), and says that Abraham is "far from being an Oscar de la Hoya."

If Arthur has no major U.S. fight to make, or even if he does, a major money fight in Germany with Sturm, which would also serve as a unification, would be aces if you ask me. They are clearly two of the division's three best with Kelly Pavlik, and Sturm remains an underrated boxer despite the fact that he absolutely refuses to leave his cocoon in Germany.

Sometimes the trash talking goes a bit far, but Sturm slinging hash is sort of a nice change of pace. Abraham-Sturm would be a heck of a good fight, and though I'm one that would favor Abraham because he mixes great boxing skill with good power, I don't think you can count Sturm out against anyone. Again, the man can box.

Frankly, I say make it happen. Unless Abraham could immediately secure a fight with Pavlik, there is no better fight for him to make. And either way, both fighters would have an even bigger negotiating chip with the two world titles Pavlik doesn't hold. Seems like a no-lose to me, but then I don't have to fight either guy.