Angered Bika goes Incredible Hulk all over Manfredo in Providence

Share All sharing options for: Angered Bika goes Incredible Hulk all over Manfredo in Providence 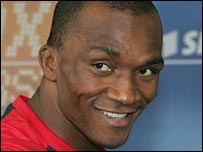 When we think back on tonight's Versus card from the Dunkin Donuts Center in Providence (I doubt we'll be recalling this one in the future, but humor me), there'll be a few things that spring to mind for me:

Let's start with the undercard fight first. Grady Brewer won a terrible split decision over Cornelius Bundrage in a fight that featured far more mid-ring collisions than it did clean punches. I scored it 94-92 for Brewer, which might seem an odd scorecard, but you have to take into account Bundrage being knocked down in the third in a really fluky sort of way, then point deductions later for each man for excessive holding. Referee Eddie Claudio sounded disgusted by the fight. He also ended up taking a point from Bundrage in the 10th for hitting on the break, even though it looked like Brewer hit first on the break. That one, I thought, was a really bum call by Claudio, but in the end, I didn't care who won, because -- and I say this with respect to the fighters, who tried but just did not mesh -- neither of them really deserved a W over the other man.

In the main event, hometown hero Peter Manfredo fought like an idiot and got blown out in the third round by Sakio Bika. I'd put that nicer, but there's really no other way to put it. He fought a really stupid fight, trying to go toe-to-toe with a faster, stronger, better fighter. He could have tried to play defense and work the body -- it's not always about being aesthetically pleasing or trying to make the Providence faithful cheer and hoot and holler.

While I do have respect for Manfredo's guts, there's no way to defend his gameplan as one being worth the time. If that was his idea to fight Bika, he never had a shot. Never. Bika wailed on Manfredo in the first round, and wailed on him again in the second until a very blatant shove was ruled a Manfredo knockdown by referee Rick Gonzales. Manfredo's gloves touched the mat on the same spill, and Bika was absolutely furious with Gonzales.

He was so incensed, in fact, that in the third round he came out fighting as angry as you'll ever see a guy fight, and he pummeled Manfredo on the ropes for what seemed like forever until Gonzales finally stepped in to call the thing off. Manfredo says he didn't think it should be stopped; personally, I thought it should have been stopped earlier. He stood there trying to block his face, not throwing punches, and absorbing shot after shot.

It was reminiscent of the Calzaghe-Manfredo third round stoppage, but Bika hits a lot harder than Calzaghe and was winging serious leather. Manfredo went from one side of the ring leaning on the ropes to another to lean on the ropes, and then it mercifully was called off.

Some of the classy Providence fans threw garbage at Bika after it was stopped. I'm not trying to slam all the Providence fans, either, just the morons. There were a lot more that didn't throw things at a fighter that cleanly won.

With the win, Sakio Bika grabbed the IBO super middleweight title, and since some folks are starting to recognize the IBO, I guess that's worth noting. I suppose they're really no worse than anyone else. But that just makes five crappy organizations lording over boxing as far as I'm concerned.

It is a testament to Manfredo that he didn't go down, though the ropes did hold him up a few times. He's a tough, tough guy, but he fought the absolute worst fight he could tonight, and I think we proved he's just not going past being the star of Providence boxing. He's given it his best shot a few times now; his best just isn't good enough to be a world-class fighter.

Once the main event ended early, Versus also showed the latter five rounds of Jaidon Codrington's return fight. I wish we'd gotten to see the first three, too, because it was absolutely the fight of the night.

The most I got out of watching anyone tonight was watching Jaidon Codrington, who beat rugged tomato can William Gill in a barroom brawl of a fight when Gill finally ran out of gas just before the final bell sounded in the eighth. Rick Gonzales had no choice but to step in and stop it as Gill tried to stumble into his corner.

The thing is, I really like Jaidon Codrington. His war last year with Bika was epic, and his story on "The Contender" was truly touching, and showed him as a hell of a fine young man. He came off as just totally easy to like while on the show. Classy guy.

But once you get past his offensive capabilities, which are good but not great, he is awful. There are so many fundamental things that I think we usually take for granted when watching fighters on TV, because even the worst fighters on TV are pretty good at boxing, sort of like how the worst player in all of even minor league baseball is one hell of a baseball player.

Wally Matthews was brutally honest about his balance, but you can't not point it out, you know? The guy is so wide, opens himself up, stumbles around the ring. When he's touched it seems like a strong breeze could blow him over, because his balance is just that bad.

He has an AWFUL habit of hanging onto the top rope with his gloves, which wound up getting him docked a point tonight against Gill. He also seems to fight in spurts; he's not like Eddie Chambers, for instance, who has a habit of admiring his own punches and not following up. Codrington is a good combination puncher. The problem is, he gets a good combination in, maybe throws another one, and then if he gets hit back, he has a tendency to climb into a shell and wait until he thinks it's safe to come out, if you will.

These are things that are correctable, I'd think, and at 24, sure you have some time to make him better defensively, make him more aware of himself in the ring, get his focus right...

But that doesn't really ever happen. Fighters kind of are who they are in almost every single case. In Jaidon's case, his flaws are so overwhelming that as much as I love to watch him fight, I don't see him ever beating a guy that can punch and take a punch. He's probably already achieved all the fame he's going to. I hope I'm wrong, too.

We'll be back in all of two days as far as round-by-round coverage goes, with Taylor-Lacy on HBO.