Share All sharing options for: Morales talks fight with Marquez, shoots down Barrera 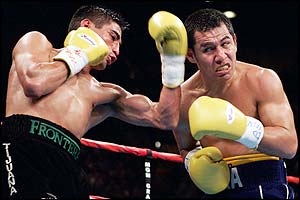 Living legend Erik Morales is still looking to make his return to the ring at lightweight, trying again to become the first Mexican fighter to win world titles in four weight classes, and he still wants true world champion Juan Manuel Marquez to be his opponent.

Morales says talks are ongoing with Golden Boy and that they're looking at a May date, which would mean that barring an interim fight, Marquez would be out of the ring about seven months when he fights Morales.

While I give this about a 25% shot at actually happening, I think it's interesting that Morales is choosing to recognize Marquez as the world champion while Marquez doesn't hold any of the four recognized trinkets. Of course, his other options would be a fourth fight against Manny Pacquiao or a fight with three-body titlist Nate Campbell, so he's sort of limited.

Morales also shot down the idea of taking a fourth fight with recently-returned bitter rival Marco Antonio Barrera, who is also trying to do the four world titles in four weight classes bit. "El Terrible" also couldn't help himself taking a shot at Barrera's return fight last week in China: "He already had his return against the great, famous Sammy Ventura."

I don't think I ever want to see them fight again, but I'll never get enough of the sniping.