Taylor in desperate need of a win against Lacy

Share All sharing options for: Taylor in desperate need of a win against Lacy 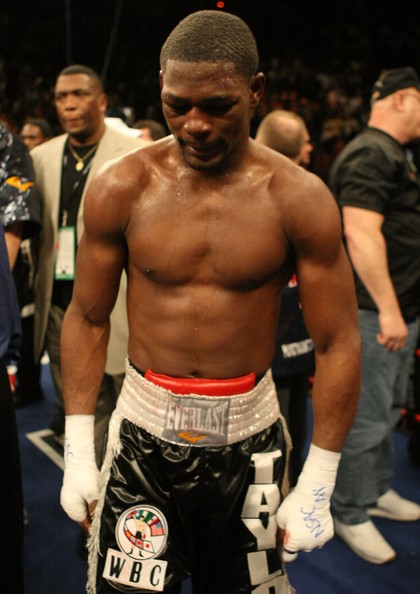 The last time Little Rock's Jermain Taylor was celebrated for a win, Chris Brown's "Run It!" was No. 1 on the U.S. Billboard chart, Roger Ebert was preparing to name the dreadful Crash as the best movie of the year, and Seth Rogen was fourth banana in The 40-Year Old Virgin.

It was December 3, 2005, when Taylor successfully defended the middleweight championship of the world against Bernard Hopkins, the man whose long reign Taylor had ended four and a half months earlier.

Since then, Taylor's career has taken a bit of a swan dive. For whatever reason, Taylor replaced trainer Pat Burns after the second Hopkins fight, going instead with Hall of Fame trainer Emmanuel Steward. In their first fight together against Winky Wright in June 2006, the lack of chemistry was apparent to anyone with at least one eye and/or one ear.

That performance from Taylor was the first sign that things weren't all going to be rosy with Steward, and that the wins over Hopkins could be nearly forgotten with poor follow-up bouts. It is one of the roughest parts of being the hot name in boxing -- it can all go away, very quickly, if you don't live up to the highest possible expectations.

After the draw with Wright, Taylor decided to stick with Steward, and to close out '06, he took a fight with former junior middleweight belt holder Kassim Ouma. Ouma, at 5'8", struggled to do anything with Taylor, though his game performance made the thoroughly one-sided fight watchable anyway.

For 2007, the Taylor camp needed to step it back up and get their guy a win over a credible middleweight. Instead, they offered "Contender" season one champion Sergio Mora a title shot, which Mora infamously turned down because he felt a fight in Memphis too heavily favored Taylor. There was talk of vicious puncher Edison Miranda, but instead, Taylor and team went with then-IBF junior middleweight titlist Cory Spinks, a notorious stink-out fighter whose boxing skills could make anyone look bad.

Taylor clearly won the fight -- though judge Dick Flaherty scored it 117-111 for Spinks. But it was not entertaining. It was a Spinks Special, as Cory laid his noxious stank all over the bout and Taylor, despite clear size and power advantages, never attempted to press.

Making matters worse, the undercard featured Edison Miranda taking on Kelly Pavlik in an eliminator bout that wowed the crowd with its constant action. Pavlik wound up battering Miranda over seven rounds. Later, after the main event had clearly seen the crowd turn against the fighters, Manny Steward told Taylor in the corner that he wished that they had fought Miranda, as he had pushed for.

And though Taylor had said he'd move up to super middleweight after the Spinks fight, he accepted the rising challenge of Kelly Pavlik in September. After flooring Pavlik in the second round, Taylor wilted under constant pressure late in the seventh, and was knocked out.

It was his first loss. And it was his last fight with Manny Steward in his corner. While preparing for a catchweight rematch with Pavlik, longtime Taylor friend and mentor Ozell Nelson was promoted to head trainer. The two worked well together in the rematch, though Taylor lost a hard-fought decision.

It has been nine months since Taylor has been in the ring, the longest break of his professional career. Tonight, he squares off with former U.S. Olympic roommate Jeff Lacy, whose career is also in need of some redemption, and at the very least, a win.

It's a major crossroads fight for both guys, obviously. A third straight loss for Taylor would be absolutely devastating. Another loss for Lacy would cause people to essentially write him off as a lot of hype that can't compete with world class fighters.

With the hunger both must have coming in, there is a major chance for some fireworks. Both can punch and need to do something special.

The winner will also be in line for a shot at the winner of the Carl Froch-Jean Pascal fight on December 6, which will crown a new WBC super middleweight titleholder. Whether the winners of the two fights ever actually hook up is certainly no guarantee, but it's even more motivation.

Taylor-Lacy will air tonight on HBO at 10:15 ET. It appears as though HBO is putting the Calzaghe-Jones replay on after the live fight, which is always nice, and we'll be here with live, round-by-round coverage and scoring.