Share All sharing options for: Calzaghe-Jones PPV numbers another big disappointment for HBO 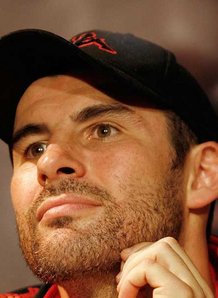 If you had any doubt that the current economy is going to seriously hamper pay-per-view buyrates for boxing, stop doubting.

When October's Kelly Pavlik-Bernard Hopkins fight drew around 190,000 buys, that was a big, big disappointment for HBO, Golden Boy Promotions and Top Rank Promotions. They were expecting around 300,000 buys.

A lot of folks blamed various factors. The economy was one, but I think people were hoping to excuse it further by noting that Pavlik was not yet a truly established star, Hopkins has never been a big draw or a well-liked fighter, and to many, matching up a 43-year old with a 26-year old just didn't seem compelling.

Steve Kim of MaxBoxing.com is reporting that the buys are in for Calzaghe-Jones, and this one is probably an even bigger disappointment.

The economy does factor in, and they can't do anything about that. Or could they? Could they have not offered what really WAS a non-compelling fight for $50? I ordered the fight because I found someone (a big Roy Jones fan) willing to split the cost. Both of us were OK with paying 25 bucks; but 50? Neither of us were going to do that. And I've paid for a lot of stuff I wasn't exactly jonesing to see (Diaz-Pacquiao comes to mind quickly).

Let's also not forget to give Calzaghe and Jones a big round of applause for that laughable undercard they presented the paying audience. Dan Rafael of ESPN.com noted the other day that the commission reported about 9,200 in legitimate, paid attendance at Madison Square Garden, which should also be considered pretty embarrassing. So the idea of putting New York fighters Judah, Salita and Figueroa on in uninteresting bouts didn't pay off live, either.

They overpriced a card -- live and on TV -- that wasn't good enough. I also mean no disrespect to Roy Jones, but I think another important factor to consider is the fact that boxing fans were largely not stupid enough to think that a 39-year old, clearly washed-up Roy Jones was going to be competitive against one of the best fighters on the planet.

HBO and promoters Calzaghe and Jones deserved this, period. They banked on Jones; mistake. They banked on Calzaghe; sadly, as good as Joe is, that's a mistake in the States, because his style just isn't appealing for a whole lot of people.

They banked on what anyone being honest with themselves could see was a mismatch. Mistake. They banked on boxing fans wanting to spend their hard-earned cash on a fight that really wouldn't have been all that interesting in the last five years. Big, big mistake.

But hey, if you didn't see it last week -- and it doesn't appear as though a lot of people did -- HBO will replay the totally one-sided main event tonight, coupled with Taylor-Lacy. Tune in, imagine you'd just watched about two hours of crap undercard fights, and then feel the pain I'd imagine many felt after realizing what they'd done with their money.