Oscar-Manny: Truly beginning the hype, and worrying about the payoff

Share All sharing options for: Oscar-Manny: Truly beginning the hype, and worrying about the payoff 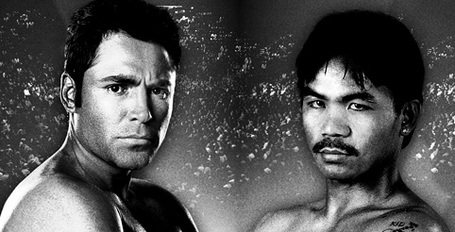 There have been more important fights. Chances are good that there will have been a boatload of better fights. But no fight in 2008 is bigger than the rapidly-approaching December 6 fight between boxing's chief moneymaker, Oscar de la Hoya, and the newest pound-for-pound favorite, Manny Pacquiao.

Though the press talk and the one-liners and the back-and-forth sniping featuring Pacquiao's trainer, Freddie Roach, have been constant since the fight was first signed (before it, actually), the true hype begins tomorrow night, when HBO's "24/7" returns, dedicated to the big showdown.

Oscar-Manny is a fight that has overshadowed the big fights around it. The back-to-back financial freefalls of the Pavlik-Hopkins and Calzaghe-Jones pay-per-views can be marginally wiped out if this one hits its target, and no doubt the target is at least a million buys.

But can it be done? These is tight times, my friends, and Oscar-Manny has not yet really won over the diehard boxing audience. Many are still firmly opposed to the fight, citing the size difference, the pointlessness, the fact that we could instead be watching Pacquiao-Marquez III or Oscar-Margarito, or any other anti-these dudes scrappin' sentiment that's out there.

A million buys is a lot. Golden Boy and Top Rank are no doubt counting on Oscar's proven ability to reach outside of the boxing landscape to draw in viewers. But Oscar's 35 years old now. He is not "The Golden Boy" anymore in most ways, either. He has long since passed through being just a good-to-great fighter and become a showman, in some aspects, and a businessman in all aspects.

He fights for reasons still. When he fought Hopkins, it was to come back against a dangerous, bigger man and try to get the Sturm backwash out of everyone's mouths. When he fought Mayorga, it's because Mayorga can sell fights and Oscar needed a comeback opponent. When he fought Floyd, they broke a lot of records, and Oscar was trying to supplant the No. 1 pound-for-pound fighter in the world. When he fought Stevie Forbes, it was because he needed a riskless, easy tune-up for a Mayweather rematch, and he sold it under the guise of "giving back to the fans."

Mayweather has retired, and Oscar broke his promise of fighting three times in 2008, as almost everybody expected he would. In the search for a December opponent, he couldn't come to a weight agreement with Tito Trinidad, Sergio Mora got smoked by Vernon Forrest, and Antonio Margarito and Miguel Cotto put on a war that would have resulted, I suspect, in neither of them getting the shot, no matter who won. Too tough, too mean, too young. Ricky Hatton still needed to give the Mayweather loss some distance, and was dealing with a trainer fallout anyway.

Enter Manny Pacquiao, a boxing phenomenon and Filipino cultural icon. And that's where we stand today.

Pacquiao proved in June, though, that despite being a big star, he needs help carrying a pay-per-view. The buys for his fight with David Diaz were hardly exciting, though not bad considering the expectations weren't great with a no-name like Diaz (no offense to David Diaz). Pacquiao can be an A-side, but he needs a strong B-side as far as sales go.

This fight is so compelling in so many ways that even three weeks of Oscar de la Hoya putting on his typically terrible acting performances on "24/7" can't hurt the positives. It is a huge fight, and for Pacquiao, a chance to do something truly amazing. No matter Oscar's age, the size gap is very big, Oscar can still fight, and Manny and his always-thrilling style will be seen by more people than have ever seen him before.

People that have never heard of Manny Pacquiao will order this fight. Chances are good they're going to be impressed, no matter the result.

For Pacquiao, it's a no-lose gamble. Though he hasn't said that outright, I think this is one of the things Freddie Roach knows for sure. Roach, who is one of sixty million guys to train Oscar, says that he knows a lot about Oscar, and has a lot of reasons to believe his man can beat him. We'll see about that.

What's interesting for me is that I don't like the fight. But I understand every reason it's happening, and I'd be lying if I said I wasn't excited to see it unfold. The air of unpredictability is unique. You don't get it that often anymore. Usually one man is a big favorite, and the other guy ain't. There aren't that many high-level shockers in boxing. This one has the potential to play out like a movie. That's not a bad thing.

As you can tell, I'm getting caught up in it myself. I can't help it. I'll sit through Oscar's painful attempts to convince me he's a fighter's fighter and he's coming for blood! and honor!, at least as long as a camera is pointed at him and he's sweating juuuust the right amount. I'll do it because the man can sell a fight.

For the good of the sport, let's hope this one actually does sell. Right now, boxing needs a big commercial hit. Powder your face and get some Vaseline on those chompers, Oscar -- we need you.