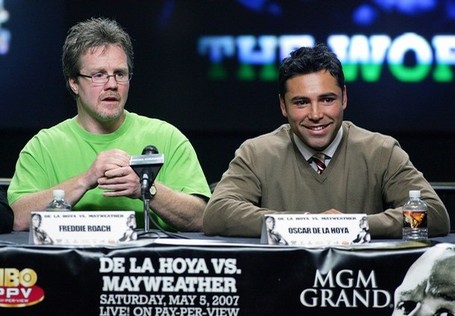 When I went over to the new and improved Ring Magazine web site (a long time overdue on "new and improved," by the way), I noticed that Freddie Roach "has a blog" for them now, starting with his first "entry."

I don't think I'll cause The Ring to crap too hard by reprinting the entire entry here:

At first, I thought putting this fight together would be impossible because Manny and Oscar were in different weight classes. Then I started thinking about it. After I trained Oscar, I realized he had trouble with smaller guys and southpaws. Oscar sparred with Ivan Calderon, the former 105-pound champion, when I trained him for the Floyd Mayweather Jr. fight because I wanted someone real quick. Calderon slapped Oscar around like it was unbelievable. I said between rounds one time, "Oscar, I want you to hit him one shot to show him who’s boss." He couldn’t do it. I got mad at him. I told him the same thing another time; we used Calderon for a couple of days. I said, "Go ahead and hit that little mother." Again, he couldn’t do it. Calderon was too quick and had a southpaw stance, like Manny does. That’s when I thought of Manny. I knew then it was a winnable fight.

I love to take little pot shots at Oscar as much as the next guy. I don't hate him, but I do think he's about fake as they come. I appreciate his attempts to go over the top, since I don't think showmanship hurts. He just stinks at it.

Freddie Roach's act of revealing "the real" Oscar that can't do anything right anymore is getting just as tired, though. Ivan Calderon? The five-foot tall, 105- and 108-pound champion? No. I'm sorry. I'm really just not buying it. If Oscar didn't land a big shot on Calderon in practice -- giving this credit for it having happened -- it might've been more because Oscar didn't feel like hitting a man he's nearly a foot taller than (Oscar is 5'10 1/2") and outweighed by 40 or 50 pounds. Manny Pacquiao, at 5'6 1/2", is a monster next to Ivan Calderon. Calderon is f---ing tiny, to put it bluntly.

And this is Freddie Roach we're talking about, the man who thinks every fighter should retire after every fight for which he trains them. I can't see him demanding that Oscar hammerfist down on to the top of "that little mother's" head.

I know it's hype, I know they're just trying to sell, but this is a lame, lame attempt at selling a fight.