Hatton: "Boxing can learn so much from MMA."

Share All sharing options for: Hatton: "Boxing can learn so much from MMA." 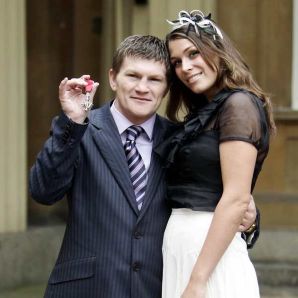 Tip of the cap to our friends at Bloody Elbow. Original article at the Daily Star is here.

And ‘The Hitman’, who faces Paulie Malignaggi at the MGM Grand Arena next Saturday, told me: "The presentation and general approach of the UFC is something that boxing can learn a great deal from."

It was Hatton’s first taste of live UFC action and he said: "The whole aspect of it was great and, rather than boxing ignore it, it should take a leaf out of the UFC book.

"For instance, they have big screens around the arena with pre-fight interviews which really get the crowd involved. Why can’t we do that at boxing matches in the UK?

"I was really, really impressed. I know that the UFC sells out wherever it is – but to be present at this fight night was an eye-opening experience."

This is something that's really started sticking in my craw in 2008, and I say it every time we see a big fight that takes place in England or Germany or Canada or Japan, too. Ricky's also right in that even those events could go a step further, too, but honestly I'd be happy if U.S. fights just had more of an event-like atmosphere to them. The UFC and, yes, WWE both know how to put on a show. It involves the crowd, gets them going, keeps them entertained, and people are actually there for the whole event.

And I know Las Vegas sites pay really well, but if you watched even Taylor-Lacy from Nashville on Saturday, I think you can also see my point when I wish that there were more events that did not take place in Las Vegas. Vegas is such a phony  boxing crowd, filled up with celebrities and their free tickets, and gamblers that come in for the main event, the only fight they have money on. Some damn good fights this year have gone ignored by Vegas audiences, but that goes for Atlantic City to a lesser degree, too. Rubio-Ornelas in A.C. and Segura-Canchila in Vegas spring to mind.

There's so much more energy on a UFC broadcast than there is a boxing broadcast. The fans are far more familiar with fighters up and down the card than it seems boxing's audience generally is. It doesn't hurt that UFC has a better network/cable TV presence than boxing, and that they simply promote better because it's all under their own banner. But these things can be accomplished in boxing. It would require more effort than I think promoters in boxing are used to putting in, though.

I'm not even saying that Richard Schaefer, Oscar, Bob Arum, Gary Shaw, Don King, Lou DiBella, etc., don't know how to promote a show. I am saying that they're all pretty far behind what Dana White and the UFC office does on a regular basis. You look at Gary Shaw's MMA attempt, which died a remarkable and gruesome death, and even with backing from CBS and Showtime, EliteXC against UFC was just night-and-day, even ignoring the fighters involved and just focusing on the presentation aspects.

I don't want it to turn into really corny, cheeseball-type stuff, but U.S. boxing promoters need to take note that a combat sport can and should be as much a show as it is the sport being put on display. There's no downside to it. It can only do good for the fights and for business.