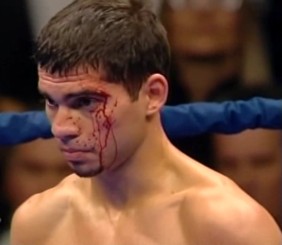 For those that aren't familiar with junior featherweight titlists Celestino Caballero and/or Steve Molitor (pictured), the two men will meet in a unification match this Friday on Showtime. It's a true hardcore fan's matchup, and Showtime should be commended for making room for it on the schedule. Here are some articles from around the web so that you can familiarize yourself with the two if you don't much about them. Both are fine, fine fighters, legitimately among the top five in their division, and a win by either puts them into the pound-for-pound top 20 discussion, too.

Steve Molitor fights for himself and his brother -- MaxBoxing.com (Excellent article discussing Steve's brother, Jeremy, a former amateur standout currently serving a life sentence for the brutal murder of his ex-girlfriend.)

We'll have more on this fight in the coming days, plus some talk about the junior welterweight championship fight between Ricky Hatton and Paulie Malignaggi on Saturday. We'll also have round-by-round coverage and scoring for both cards.