Share All sharing options for: Gary Shaw says Kimbo could be heavyweight champ 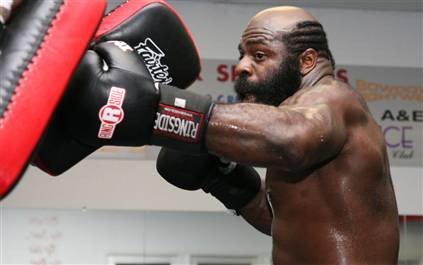 Gary Shaw is a lot of things. I would list some of those things, but I fear it would only needlessly offend.

I really don't think "stupid" would be on my list, though. Even with his many ugly fallings out with fighters, and for as laughable as his run with EliteXC was, the man isn't stupid. He's made a lot of money, brought up some great fighters along the way, and put on some damn good shows.

Gary also is in love with Kimbo Slice. There is no other way to put it. Gary struggles to come up with reasons that he thinks Kimbo Slice is still on the upswing as a pro athlete, trying hopelessly to compare him to Mike Tyson and noting times when chefs at restaurants wanted to come out and say hello to him.

Gary can't quite explain it; you have to be there, man. You have to experience it for yourself. You have to find this IT that Kimbo has. Ya gotta believe.

Gary thinks Kimbo Slice could be a heavyweight titleholder in boxing. Admittedly, says Gary, Kimbo is a novice. But imagine if he learned to sit down on his punches, turn them over. Imagine, if you will, if Kimbo Slice wasn't a 34 year old man whose upside is hampered dramatically by his age.

But that's really all it is, isn't it? It's imagination gone wild with Kimbo, who is quite a nice guy, proved gracious in defeat against Seth Petruzelli, and never came across as arrogant in victory, either, and that goes back to his ever-popular streetfights.

While Gary Shaw dreams of Kimbo Slice, heavyweight boxing champion, and claims that today's heavyweight scene is open enough for his guy to grab a title, the actual world keeps moving on. Neither Klitschko brother would have any trouble with Kimbo, as both are far too savvy, even with Wladimir's lingering chin questions. Big Nikolai Valuev could well crumble to a Kimbo power combo, but it's also a question of whether or not Kimbo would have the technical prowess to get past the giant's jab. And if Seth Petruzelli can rock and drop Kimbo, Valuev can, too.

It's not even that I'm against seeing Kimbo give boxing a shot. But just like in MMA, his problem would be the race against time. He isn't of the age that he can take five or six years to hone his craft and work his way up. No matter how much Gary or anyone else talks about "the proper training" and making him a truly better pro fighter, I would expect that within 8-to-10 pro fights, Shaw and another promoter would get together, try to sell tickets by the bushel, and send Kimbo out into a situation he's not really prepared to handle. Some will argue that Kimbo found himself in that situation against James Thompson back in May; his 14-second October loss to the smaller Petruzelli gave his naysayers a huge, celebratory, "I told ya so!"

And it's not Kimbo's fault. It's Shaw's.

Gary Shaw dreams of Kimbo Slice, megastar and great success, because Gary Shaw sees big money in the guy. You can't blame him for that, either. As a promoter, that's business goal number one. Make money. Kimbo does have that potential, and his skills need not go past novice to accomplish such in the short term.

But in the long term, is Shaw merely trying to keep a company line going with regards to Mr. Ferguson? He says all these great things about Kimbo, but he never truly expresses any great belief in Kimbo's abilities. He talks only about persona, about the head chef running out to meet the man, about people reacting to him when he walks into a room.

Gary talks business. That's because Gary's a businessman. His dreams are tinted green. For Kimbo's sake, I hope the money is his main aspiration, too, because then at least promoter and fighter are on the same page.

The image with Kimbo Slice is the easy thing to sell. They've already sold that. They can still sell that. But it's never going to come easy to get him accepted as a legitimate professional fighter, no matter which sport he chooses to ply his trade. There are too many that are dead set to be opposed to his rise that even if he had the skills of a prodigy -- which he does not -- he'd be meeting resistance.

Really, as much as I actually like Kimbo Slice, I think the whole thing is a battle that neither fighter nor promoter can ultimately win.

But remember to be fair to Kimbo Slice, who has never asked anyone to consider him a top-grade fighter. If you want to blame anyone, blame the dreamer.