Share All sharing options for: Duddy-Hearns in trouble as management squabble continues 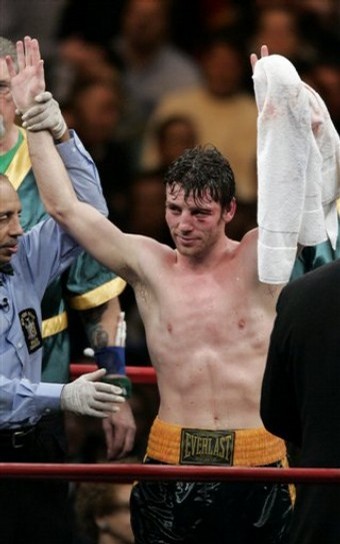 Following a cancellation of his November fight against Sam Hill, all eyes in John Duddy's career appeared pointed toward a January matchup on Boxing After Dark with fellow unbeaten Ronald Hearns. Instead, it looks like Duddy's next battle could be in the courtroom, as his ongoing troubles with Irish Ropes Promotions and manager Tony McLoughlin appear to have no amicable end in sight.

Duddy (25-0, 17 KO) may look back on 2008 as a lost year, and that appears to be headed into 2009, too. With a debated win over Walid Smichet and a rout of unheralded Charles Howe, Duddy has managed to get only two fights in, neither available on U.S. television.

A cut in the Smichet fight cost him what appeared to be a done deal shot at middleweight champion Kelly Pavlik, and negotiations for a fight with 154-pound titleholder Verno Phillips also fell through. The latter may be part of Duddy's concerns about management, come to think of it.

Not that I think Duddy is a great fighter or destined to be a Hall of Famer or has any more than what he's shown, but there will always, always be a place for a charismatic, crowd-drawing, crowd-pleasing fighter like Duddy, who pretty much lacks the ability necessary to be in a bad fight. The blood-and-guts warrior is important in boxing, and Duddy is that sort of guy. It's too bad his career looks to be on ice for the short term.