Share All sharing options for: Yuriorkis Gamboa returns on January 9 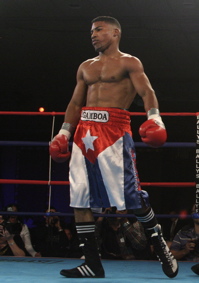 Top prospect Yuriorkis Gamboa will return to action on January 9 in Primm, Nevada, a place he's made his home away from home in the last year. He'll share the ESPN2 Friday Night Fights bill with fellow Cuban Gold Medalist and defector Odlanier Solis, who will be in heavyweight action. The two will share a pro bill for the first time.

Gamboa (12-0, 10 KO) went 5-0 in 2008, including notable televised wins over Darling Jimenez and Marcos Ramirez on HBO. He beat Jimenez and Al Seeger in Primm.

The explosive Cuban may face Belarusian "contender" Andrey Isaev (19-1, 6 KO), who is ranked No. 2 by the WBO, which is about as laughable as rankings come. Isaev has never beaten anyone, but was stopped by still-unbeaten Brit Kevin Mitchell in 2006. Gamboa, needless to say, will be a massive favorite, and should he get past Isaev (or whomever), will move on to face Elio Rojas for an interim title.

Solis (12-0, 8 KO) has no rumored opponent as of yet. He is among the best prospects in the heavyweight division, and the 28-year old has been facing solid pros pretty much his entire pro career thus far, though he's yet to face a serious challenge. He is fast-tracked, though, much like Alexander Povetkin was.

Frankly, no matter the opponent, Gamboa is so much fun to watch that that week's FNF will be better than the average bear regardless. There are really very few guys with his offensive skillset, and his vulnerability makes him even more interesting.