Share All sharing options for: Haye now looking at Vitali, not Wladimir 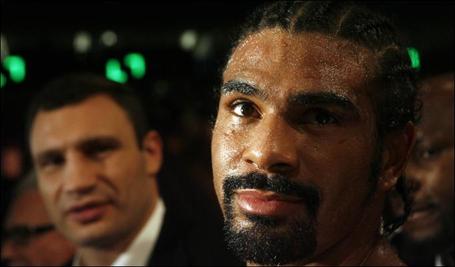 "At first they were talking about Wladimir, now they pull Wladimir out and offer me Vitali," Booth told Setanta Sports.

Booth added it was a case of either fighting the brother "with better punches and a weaker chin [Wladimir] or the one with the better chin but who has slowed considerably over the last few years [Vitali]."

Coming off of his destructive domination of Monte Barrett in London, which Vitali attended in an obvious set-up fashion, Haye may have to wait a bit. Vitali has been ordered by the WBC to fight mandatory challenger Juan Carlos Gomez, another former cruiserweight king. In the meantime, Haye could take another fight with a fringe contender to stay busy and hype even further.

Right now, I'd have to say that Haye versus either Klitschko brother will be the most legitimately anticipated heavyweight fight in years. Vitali has a rock solid chin, and watching Haye try to chop him down could be extremely compelling.

One thing seems certain: unless something catastrophic happens, Haye and a Klitschko will battle in 2009. That's good news for the division and for boxing in general. Haye has massive star potential as a charismatic, brash, big-punching, genuinely exciting heavyweight. His being English won't hamper him in the States, either; this guy, if all goes right, could be a major star. He has some obstacles, of course, and he seems intent on taking them head-on. That's another thing to like.