Share All sharing options for: Report: Riddick Bowe could fight on Klitschko-Rahman card 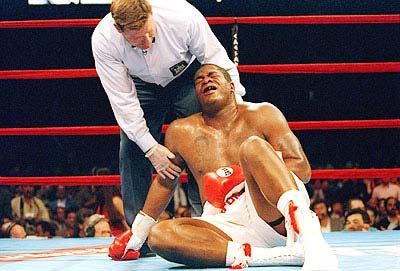 According to BoxingScene.com, reports are coming from Germany that 41-year old former heavyweight champion Riddick Bowe may wind up fighting on the undercard of Wladimir Klitschko-Hasim Rahman on December 13.

As the great Chuck D said, don't believe the hype.

Bowe also hinted that he would enter MMA last year, but didn't show up. That has happened a few times with boxing, too. "Big Daddy" has often left promoters hanging with no notice in the last few years, and it won't be surprising if he does so again.

Bowe was a hell of a fighter when he was dedicated and keeping himself in shape. His trilogy with Evander Holyfield was the stuff of heavyweight legend. But it's been over a decade since Bowe could be taken seriously. He's old, out of shape, and rustier than a '79 Ford in the Wal-Mart parking lot.