Share All sharing options for: Caballero-Molitor: Unifying by necessity 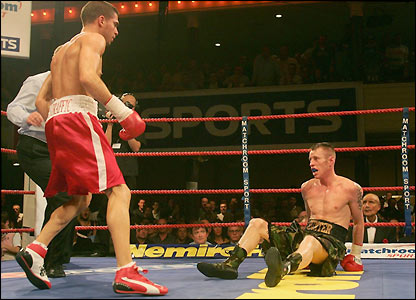 Both of the Molitor brothers were supposed to be here.

Jeremy, the older brother, was the 1998 Commonwealth Games welterweight gold medalist. He and younger brother Steve were called "The Bruise Brothers," local celebrities in Ontario.

It was Jeremy's footsteps that Steve wanted to follow in. At nine, Steve began boxing, which Jeremy was already quite good at.

Jeremy failed to make the 2000 Olympic team in Canada, and after that, things got out of control. Addictions to cocaine and alcohol led Jeremy down all the wrong paths in life, and they ruined his career. Even when he moved to Toronto to train with Steve and try to get things back on track, it didn't happen.

In 2002, after moving back home, Jeremy broke a restraining order and confronted his ex-girlfriend, a 21-year old woman named Jessica Nethery. He stabbed her 58 times. Two years later, Jeremy Molitor was convicted of second-degree murder and sentenced to life in prison. He is not eligible for parole until 2015, and it's not likely he'll be seeing the outside world at that time, either.

You've no doubt heard the story of the Molitor brothers at least in passing before if you follow boxing. Steve, now 28, is the IBF junior featherweight titleholder. He is a big star in Canada, one of many Canadian and Canadian-based fighters that have made the boxing game a hot ticket north of the States.

If both Molitor brothers couldn't achieve professional boxing stardom, Steve is doing his damnedest to be as good as possible on his own. So far, he's been excellent. The southpaw from Sarnia, Ontario, has so far run up a 28-0 record. His 11 knockouts are deceiving -- there have certainly been fights where "The Canadian Kid" has been perfectly willing to merely run up the scorecards and win the fights going away.

Whatever it is, Molitor is a TV fighter, as fun to watch as he is skilled, and he's very skilled.

His pro career has had its share of ups and downs outside of the ring, though. A nasty split with ex-trainer Chris Johnson and numerous run-ins with his promotional authorities have all but banned him from taking his show on the road and going to the States, which he's had the desire to do. Simply put, fights in America wind up on American TV. Rarely can the same be said of fights held in Canada.

Through arguments that have hampered his career a bit and the fact that he's as good as he is, nobody wants to fight Steve Molitor. While the 122-pound division is littered with brave, action-based warriors like Israel Vazquez, Rafael Marquez, Juan Manuel Lopez and Daniel Ponce de Leon, among others, Molitor has toiled in Canada with very little American fanfare. Only the diehards know just how good he really is. 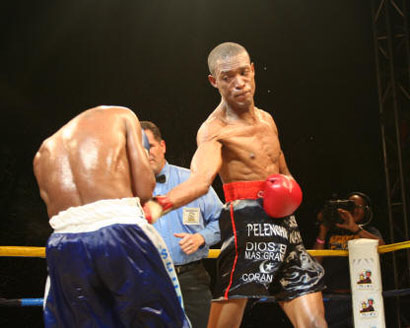 And then there's Celestino Caballero.

Since I'm not actively trying to sell anyone on a fight or a fighter in particular any time I write these previews or anything else, I'm not going to lie to you. I think Caballero is a horrible, filthy fighter. At 5'11", he makes the 122-pound limit with no reported trouble whatsoever. He is a genetic freak. He makes 6'1" welterweight Paul Williams look like Butterbean.

Caballero's exceptionally awkward, unskilled, unpolished, unrefined style can give anyone fits. He was the first man to beat Daniel Ponce de Leon back in 2005. He does have two career losses, but zero since 2004.

Last year, he was given the undercard spot on Showtime's Vazquez-Marquez II presentation, fighting Jorge Lacierva, a man who found himself seven inches shorter than the defending titlist and basically had to leap to hit him in the head.

It was an ugly, atrocious fight, entertaining for all the wrong reasons. It was also Caballero in a nutshell; any advantage he can take, he'll take. Headbutts, illegal shots, holding and hitting, elbows -- he does it all. If he could reach low enough against his average opponent, I'm sure he's a man who'd love a good, well-timed low blow.

Caballero (30-2, 21 KO) has power because of his size and the ridiculous angles he can take when throwing a punch. He pushes more than he punches often times, and doesn't seem to land full force. There's no "end of the punch" from Caballero too often; it's more how hard he can shove you with his fist after he's wound it up and launched his spider arm in your direction.

These guys are fighting each other mostly because no one else wants to fight either one of them. Molitor is hamstrung to fighting in Canada, for all intents and purposes, and Caballero isn't worth nearly enough money anywhere he fights for the risks that come with facing someone of his ridiculous height.

As much as I can't lie about my fan feelings for Caballero, I'm glad he's found a dance partner. He's absolutely among the division's five best, and that deserves to be seen on American TV. Showtime fitting this one in is another testament to a network that has had an excellent boxing bounce-back from a dreadful 2007.

We'll have live, round-by-round coverage and scoring of the Caballlero-Molitor unification bout tomorrow night, and we hope you'll join us then.