Margarito continues complaints about Oscar as reason for turning down Mosley

Share All sharing options for: Margarito continues complaints about Oscar as reason for turning down Mosley 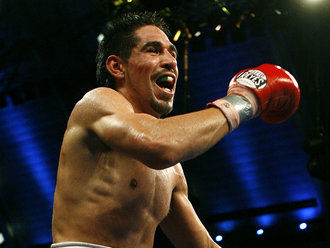 Antonio Margarito says he turned down a fight with Shane Mosley for a 50-50 split with both fighters getting $2 million because Oscar de la Hoya didn't fight him in December, instead choosing Manny Pacquiao.

Look, I'm all about Tony Margarito starching Oscar in the press for fighting Pacquiao. Margarito has been brash, unforgiving, and tough about that fight, which he hates, regardless of whether or not it does smack of some jealousy that it's Pacquiao getting the payday.

But Margarito using this as an excuse to leave Shane Mosley hanging on a fight that appeared agreed-to is hilarious and makes him seem like a catty teenage girl. The main sticking point, for me, is Oscar never said that he was going to fight the Cotto-Margarito winner. He said they'd be in strong consideration. Margarito took it as more than was said.

You can't be the tough guy and the wounded child striking back with a well-timed shove from behind at the same time. You can't be an "anyone, anywhere" talker and then turn down a good opponent because someone else turned you down for something that was never even close to concrete.

Margarito also says he may take a fight in Mexico before going into a rematch with Miguel Cotto, which it seems is the lone fight he actually desires.